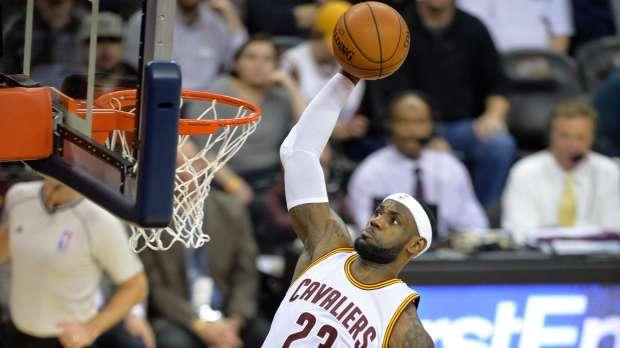 LeBron wasn’t too impressed after he took a whiff of his body odor and gave voice to the status of his hygiene. Wait, what? He was talking about his performance during the 4-game losing streak? Well, he may have been right about that.

Prior to the game against the Magic, LeBron James took it upon himself to take responsibility for the Cavaliers’ recent 4 game slide, saying “We’ve got a four-game losing streak, so I stink. I’m not doing my job. I’ve got to do a better job.” During that measly 4-game stretch, James averaged just 18.5ppg. He never scored more than 22 points.

{adinserter 2}Tonight however, he got it going early, scoring 16 points in the first quarter, which was enough to surpass his scoring performance against the Spurs a few games back, when he had 15 points, in 34 minutes. He finished with 29 points and 11 assists, in 31 minutes, to help stop the Cavs’ 4-game streak. He and Kevin Love sat the entire fourth quarter, as the Cavs were leading by upwards of 30 points late. Here are the highlights to the Cavs’ redemptive victory:

Cavs will get this win with LeBron playing 31 mins, Love 32 mins and Kyrie 31 mins.

LeBron wasn’t the only one who stepped up. The Cavs collectively played great defense, holding the Magic to just 76 points on 36% shooting from the field. That was the lowest the Cavs have held any opponent this season, and the lowest scoring output for the Magic.

Kevin Love’s involvement in the Cavs’ offense has been under scrutiny lately, as the All-Star forward wasn’t getting many touches before tonight’s game. Tonight, he had the second-most shots behind LeBron, and was noticeable more incorporated in the offense, as he was setting pick-and-pop screens, and cutting to the basket. Love apparently got the memo that he was shooting a career high 44% of his shots from three point land, and only resorted to one attempt this game. Love had multiple open 3-point looks tonight, plenty of which he passed up with a pump fake, and step in, for wide open mid-range jumpers. He finished with 12 points and 8 rebounds.

The 1999 Spurs started 6-8 before winning the first of the franchise's five championships. In unrelated news, today's Cavs are 6-7.

The Cavs improve to 6-7 and play a rematch with the Wizards at home this Wednesday.
Takeaways from the game:

1) Coach David Blatt made mention of a lineup change prior to tonight’s game, but then insisted that he needed more practise in with a new squad before making anything official. However we may have seen a glimpse of something new, as Dion’s role seemed to have diminished this game. He played almost the entirety of the 4th quarter, where the Cavs’ bench were given some playing time, including James Jones. Waiters barely got playing time before the 4th quarter.

2) Irving is playing good team basketball. He totalled 12 points and 4 assists, but that shows he wasn’t trying to force anything and was actively looking to get his teammates involved.

3) Anderson Varejao continues to be an integral part of the Cavs’ offense. He came into the game shooting 57%; good enough for best in the Eastern Conference. Tonight, he shot 7/9 FG attempts.

4) The Cavs win when they share the ball. They had 30 assists tonight. During the Cavs’ 4 game losing streak, they averaged 19 assists per game. In their wins, the Cavs are averaging 25 assists a game.

5) Will Cherry had an impressive game, and is doing a marvelous job as a backup point guard in place for injured guard Mathew Dellavedova.