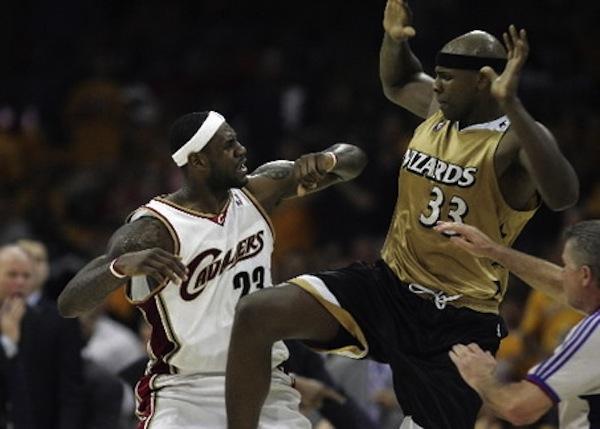 For a majority of the LeBron years in Cleveland, the Cavs were in contention for the NBA Eastern Conference Finals. After the league’s best player left for South Beach, the Cavs instantly became contenders for winning something every year; the lottery. The bright side of being in the lottery is acquiring numerous top picks in the draft. While some haven’t been the greatest of selections, the Cavs still managed to get Kyrie Irving and Andrew Wiggins; with both being #1 overall picks. The obvious reason why the Cavs will be one of the favorites is because the return of LeBron.

What other team was highly competitive during LeBron’s last stint in Cleveland, but then went into contention in the lottery each year; only to finally see the light again? The answer is the Washington Wizards. Similar to the Cavs, the Wizards franchise took a drastic turn for the worse. While it wasn’t a player leaving in free agency that caused this, but Gilbert Arenas being suspended indefinitely from the league. A team that once featured players such as Antwan Jamison, Brendon Haywood, Caron Butler, Deshawn Stevenson, and Gilbert Arenas, had three heated playoff series against the Cavs in consecutive years. Thinking of these days, I often remember LeBron being called overrated by Lance Stephenson; who was later dissed by LeBron through an interview and then Jay Z in a D.C nightclub. The series was competitive and physical between these two teams, but the Cavs always prevailed to win.

Like the Cavs, the Wizards have had their ups and downs in the draft with players such as John Wall (2010) and Bradley Beal (2012). They drafted Jan Vesely with the 6th overall pick in 2011 and have already traded him over to the Denver Nuggets. In 2013, they chose Otto Porter 3rd overall and he is on par with Anthony Bennett when talking about busts. Big men additions over the past few years were Nene and Marcin Gortat, then this year they lost Trevor Ariza in free agency. Ariza was a big loss, but was filled by super clutch free agent, veteran Paul Pierce. Pierce is one of LeBron’s greatest rivals of all time.

{adinserter 2} As of right now the Wizards match up well against the Cavaliers. The point guard matchup between Irving and Wall is going to be one for the decade. Irving has the edge when it comes to scoring and shooting, but Wall is a far superior defender and floor general. The shooting guard match up between Beal and Wiggins should also be interesting. Beal is a tough defender and decent shooter, but Andrew Wiggins’ defense and offensive potential is overwhelming to Beal. Not to mention there is about a 4 or 5-inch difference between the two as Wiggins measured a tad under 6’9 and Beal is around 6’4. At small forward, the matchup is between superstars LeBron James and Paul Pierce. LeBron is 29, currently in his prime, and the best player in the world. James wallops Pierce in nearly every aspect of the game. While Pierce isn’t the player he once was with the Celtics, he proved he that he can still play at a high level. While Ariza filled the SF spot nicely for the Wizards, Pierce brings the clutch element. Washington could of beat the Pacers in the playoffs, but didn’t have anybody who could finish games. Pierce should relish in that kind of role. The big men for the Cavs don’t match up well with the Wizards as Nene/ Gortat are both better than any combination of big men the Cavs can put on the floor. If the Cavs go small with LeBron at the power forward spot, it could create a matchup nightmare for the Wizards. If Kevin Love is dealt to the Cavs, then either Nene or Gorat will be forced to chase Love out to the 3-point line, which wouldn’t be good for the Wizards. The Cavs bench will be stacked compared to the Wizards, as veterans Mike Miller, James Jones, and potentially Ray Allen will join up with LeBron to provide outside shooting. Dion Waiters, who could be a serious 6th man of the year, if he accepts that role, is a dynamic playmaker who I already envision throwing lobs to James and Wiggins. If Anthony Bennett can also play how he did in the NBA Summer League, he too will have a solid year. Bennett can take Tristian Thompson with his ability to space the floor. The Wizards have a very deep and well-rounded bench that consists of veterans Andre Miller, Kris Humphries, Dejuan Blair, Drew Gooden, Martell Webster, and young talent such as Kevin Seraphin, Glen Rice Jr, and Otto Porter.

These two teams are almost completely different than when they used to meet nearly a decade ago; whether it be the players, coaches, and even the jerseys. Both franchises have taken contrasting routes to get back towards the top of the Eastern Conference. I can see these teams meeting in the playoffs already and it will definitely be a fun one folks. With the Cavs line up right now, I would say Cavs in 6. If we manage to keep Wiggins and get Love, then CAVS in 5. Potentially a sweep.