After winning Game Four in Cleveland, the Golden State Warriors have managed to take back home court advantage and turn the finals into a best of three series against the Cleveland Cavaliers.

The key to winning has never been clearer for both teams. The Dubs relied on their “strength in numbers” mantra as Steve Kerr made the most out of his deep lineup to create crucial changes in their scheme of things while the Cavs’ tickets to their own success have been pure grit and heart plus a little bit of LeBron.

RELATED: 5 Players Who Have To Step Up

The Warriors have regained that air of supremacy thanks to a 36-point fourth quarter in their Game Three loss to the Cavaliers as they seemed to have finally figured out the stifling defense of their opponent.

Kerr made the adjustments and he placed his bet on the added dimension that David Lee provides on offense. He will remain to be a target of the Cavaliers` pick and rolls on the other end but so far the good outweighs the bad. Other than Lee, Andre Iguodala has seen a spike in his value when he became the starter in Game Four enabling Golden State to out run the weary legs of Cleveland. He also outscored LeBron James, 22 to 20.

Getting back some semblance of their All-Star form is always great for those two bench players but atop everything that the Warriors do is their Most Valuable Player, Stephen Curry, who has finally regained his MVP-form after being frustrated by Matthew Dellavedova`s defense. In the Warriors` past two games, Curry is back to his old scoring ways averaging 24.5 points.

On the Cleveland side of things, after storming out of the gates in the first three games, the Cavaliers have proven that they are human after all. Fatigue has taken its toll on the team’s seven-man rotation.

Here’s the how the Cavs have shot against the Warriors through four games: 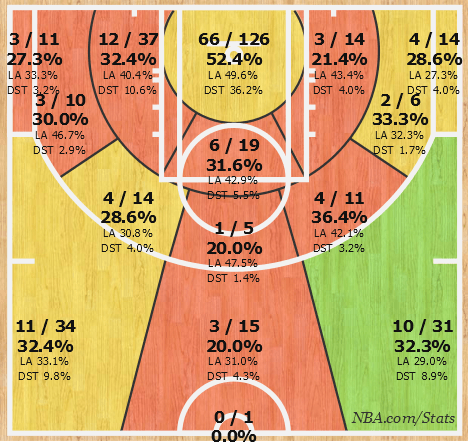 Looking back at how they did it, it’s compelling to think that the Cavs only had one way of going about doing damage. Go to LeBron, let him do his thing, and play rugged defense. The Warriors knew what was coming to them yet they could not seem to stop a “better rested” James.

The Cavaliers` lineup, despite being severely undermanned, still pose a very strong threat with their lineup structure. LeBron James still has his rim protector and glass cleaner, his three-and-D wing guys, his veteran sharpshooter, and his pesky point guard.

Other players must step up offensively for Cleveland. It’s not going to be about LeBron all the time. Producing GOAT-like numbers of 40-12-8 after three games do require quite a bit of effort and with James showing the effects of fatigue after scoring only 20 points in Game Four, the call for Iman Shumpert and, more especially, J.R. Smith to finally have a breakout game in the series has never been louder.

The two-days in-between Games Four and Five should give them more rest as every opportunity that the Cavs can get to let their bodies take a break is gold so the Warriors must take advantage of their depth and get fresh legs as often as they can because the longer this series gets, the less gas Cleveland has left. D

It’s really about dictating the pace for one to end up with the victory. In their two wins, Golden State eclipsed the century mark while the wins of Cleveland were both showcases of their defense.

The Dubs need to play fast and use the Cavaliers` fatigue to their advantage. The Cavs need to play grind out ball with whatever energy is left of them.

The Golden State Warriors are now the odds-on favorite to win the title by virtue of their home dominance and deep rotation of healthy personnel. However, all is not lost on the Cavaliers as they have already proven that they are mentally prepared to win both at The Q or in Oracle. What makes the Cleveland Cavaliers a lot more dangerous is the fact that they have something that can never be measured by anything and that is their collective heart. 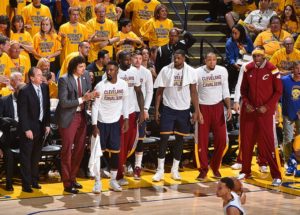 JUST IN: 5 Cavs Who Need To Step Up Their Games To Avoid Elimination
Related TopicsCleveland CavaliersGame 5Golden State WarriorsNBA Finals