Winning History of the Cavaliers? 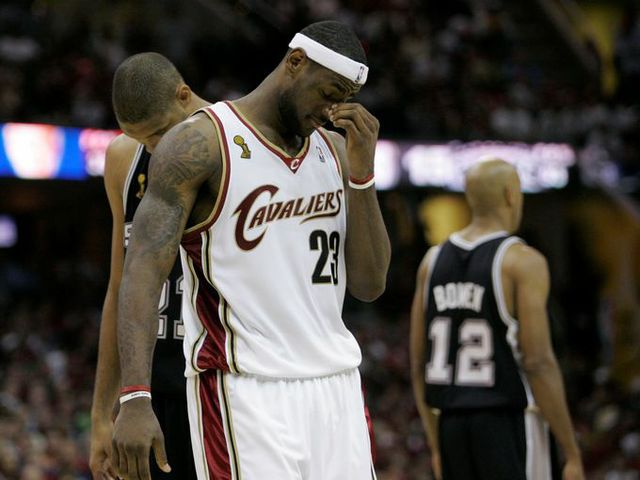 The year 1970-71 was a great year for basketball fans in the city of Cleveland. The National Basketball Association just had its fifth ever expansion draft, a draft in which a sports league chooses to create new teams in cities across the country. In the draft, the NBA founded the Portland Trailblazers, Buffalo Braves, and Cleveland Cavaliers. With 11 players following the draft, the Cleveland Cavaliers had a disastrous first season under former college basketball coach Bill Fitch, who was hired by then Cavs owner and businessman Nick Mileti. They started with a 15-game losing streak before finally earning a win on November 12. Things did not go well from there as they lost another 12 games bringing them to a league worst 1-27 record. They finished their first season at an eye-popping 15-67.

{adinserter 2} The Cavaliers were up and down for the next 15 years, alternating winning records and losing records at the end of the season. A lot of their luck changed in the 1986 draft where they were able to draft center Brad Daugherty with the number 1 pick along with forward Ron Harper, the number 8 pick. Cleveland also acquired the reliable and consistent shooter Mark Price from the Dallas Mavericks on draft night, a move that would put them in a position to be an Eastern Conference force for the coming years.

In 1988, the Cavs started their run of success when they traded shooter Kevin Johnson for power forward Larry Nance. Together, Nance and Brad Daugherty became the frontcourt mates the Cavaliers needed defensively on the floor. Although their regular season record was looking good, they simply could not make it past the first or second rounds of the playoffs. A series of back injuries eventually brought Daugherty’s career to an abrupt end in 1994, followed by the retirement of the shot blocking machine Larry Nance shortly after that year. Soon, Mark Price began getting hampered by injuries which ultimately led to him being traded around and him retiring in 1998. Before you know it, the Cavaliers winning faded back as they returned to their losing ways.
Those losing ways remained so through the drafting of Lithuanian shooting big man, Žydrūnas Ilgauskas, now a Cavalier legend. Finally, in 2003, the sparkle of hope arose as a young kid from Akron began mounting to stardom in Ohio. LeBron James of St. Vincent-St. Mary High School had become one of the top prospects in the country and was projected to be selected number 1 overall by the longtime struggling Cavaliers. The 18 year old, fresh off of his high school prom and graduation, did go number 1 in the 2003 NBA draft beginning his career 40 miles north of his hometown in Cleveland.

Although James and Ilgauskas, the leaders of the Cavaliers for years to come, struggled with ways to bring victories at first, Cavs fans had hope as LeBron James only got better as the years progressed. Ilgauskas struggled with foot injuries but was able to stay healthy enough near the middle-to-end of his career to be effective. The Cavaliers made their strongest run making to the NBA Finals in 2007 before losing at the hands of the San Antonio Spurs in a somewhat embarrassing 4-0 sweep. From there, Cleveland only got better in terms of bringing in a supporting cast, adding point guard Mo Williams, shooting guard Anthony Parker, forward Antawn Jamison, and center Shaquille O’Neal. Before the Cavs could reach the finals again, however, they had trouble getting over the hump when it came to beating the Boston Celtics and the Orlando Magic. Eventually unable to make any playoff push, LeBron James, arguably the best thing to happen to Cleveland sports, left the Cavs for a better chance to win a championship in Miami, joining Chris Bosh and Dwyane Wade to play for the Heat. Despite the success that Cleveland had in the last 2 regular seasons, going 66-16 in 2008-09 (including an outstanding 39-2 at home) and 61-21 in 2009-10, they could not make any noise in the playoffs which ultimately led to James’ decision.

The following 4 years were some of the most grueling years for the Cavaliers, as they endured records of 19-63 in 2010-11 following year of LeBron’s exit, 21-45 in 2011-12, 24-58 in 2012-13, and 33-49 in 2013-14. Although they have won multiple drafts with number top 5 picks, it wasn’t enough to get them much better as they comprised a 97-312 win total (31.1 win %). Their most notable picks were Kyrie Irving and Tristan Thompson at numbers 1 and 4 respectively in the 2011 draft, Dion Waiters at 4 in 2012, and Anthony Bennett at number 1 in 2013. It is currently unknown whether the recently drafted number 1 pick Andrew Wiggins is going to remain a Cavalier or be traded for the services of Kevin Love, but either one would make a great addition to a Cleveland roster than needs scoring and defensive help.

Once LeBron decided to leave via free agency announced in a 1-hour television special called “The Decision,” the city of Cleveland felt betrayed and brought back to naught, as James pursued his championship goals without them. The hate letter by owner Dan Gilbert, the burning of James’ jerseys, and the villainous character given to him with his decision were all things that LeBron greatly didn’t expect when he decided to leave. However, as the time crept closer to free agency again, Cavs fans and people around the world developed this glimmer of hope that LeBron would come back to Cleveland to try and win a championship for his home-state. That hope became reality on July 11,2014 when James announced via a letter on Sports Illustrated that he was coming home. JUST IN: What Kyrie Irving Can Learn From LeBron James
Related TopicsCavsHistoryLosing