Will the Cavs keep Derrick Williams after good first impression?

Last night (Thursday), the NBA’s defending champion Cleveland Cavaliers were in Oklahoma City for a nationally televised match-up against the Thunder. When the dust settled inside Chesapeake Energy Arena, the Cavs were defeated, 118-109.

Despite the loss, the Cavs got a solid look at Derrick Williams, the newest addition to the team. Williams, who was signed to a 10-day contract worth just under $70,000 yesterday morning, made the most of his 22 minutes of playing time off the bench, scoring 12 points on 3-of-3 shooting from the field along with a 6-of-8 mark from the free-throw line. The 25-year old former Arizona Wildcat and number two overall selection (Minnesota Timberwolves) in the 2011 NBA Draft spoke fondly about his first impressions of the Cavs. Joe Vardon of Cleveland.com has Williams’ quote in his recent article.

This is my first day, but you can just feel the energy as soon as you step in the locker room,” Williams told Cleveland.com after last night’s game. “Everyone is ready to play. That’s the championship mentality everyone has here.”

Williams holds career averages of 9.1 points and 4.1 rebounds, but did he impress the Cavs enough? According to Vardon, the champs like several elements of the 6’8″ 240 pound forward’s game, including size and the ability to play multiple positions. Further adding to his appeal, Williams already has a relationship with a few members of the team. Both Channing Frye and Richard Jefferson are fellow University of Arizona alums. Kyrie Irving was taken one pick ahead of Williams in the draft. And finally, Williams and Kevin Love were teammates as members of the Minnesota Timberwolves.

Vardon explains what the Cavs, who were indeed fairly impressed, could do if they intend on keeping Williams.

Prior to last night’s game, Cavs Head Coach Tyronn Lue, who has been dealing with injuries to his rotation for some time now, spoke with members of the media about the decision to bring Williams aboard.

We just thought it was a good signing for us and he was a good player who I always liked,” Lue said. “His energy, his athleticism. What he does getting to the free throw line, driving the basketball.”

Williams admits that he is a bit put off by the fact that he has been on several losing teams over the course of his six-year NBA career. Maybe being a part of a winning organization like the Cavaliers is just what the doctor ordered.

Tonight we didn’t get the win, but it was just a good flow,” Williams said last night. “I haven’t been in a good flow since I’ve been in the NBA and a lot of it is with losing, a lot of losing. We’ve been a lot of games under .500. When you come to a team like this, every game means something every single time you step on the court. I think that’s definitely what I’m missing so far.” 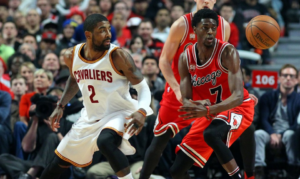