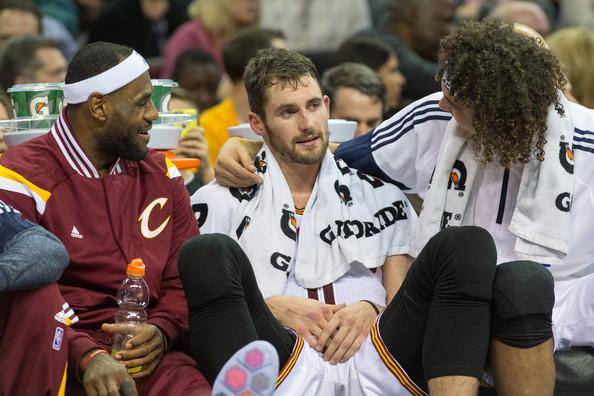 It’s Thursday and we’re now three days removed from Love’s statements that he made earlier this week on a pair of radio shows. Here’s the first from ESPN’s Mike & Mike:

According to some reports, LeBron is reportedly frustrated with the fact that he has tried to reach out to Love, but he hasn’t really reached back. James has built chemistry with his teammates by getting personal, getting to know them. Love on the other hand, is a player who seems to keep to himself dating back to his Minnesota days.

For many, it can be taken as a sign that Love is unsatisfied with his position in Cleveland and wants out, potentially to Los Angeles where he’ll be able to have the Lakers be his own once Lakers’ legend Kobe Bryant retires.

But let’s take a second and see why exactly it doesn’t make sense for Love to want to leave. Teams and friendships aren’t build overnight. This is something that takes time, patience, and battle-tested experience. Sometimes, it’s as easy as the Big Three in Boston back in 2008. Other times, it can take a little while longer like the Miami Heat of 2010. LeBron James said it best when he announced his decision to return:

I’m not promising a championship. I know how hard that is to deliver. We’re not ready right now. No way. Of course, I want to win next year, but I’m realistic. It will be a long process, much longer than it was in 2010. My patience will get tested. I know that. I’m going into a situation with a young team and a new coach.

Love was ecstatic to come to Cleveland and he still is! All this talk about him not wanting to stay because of his struggles or reports of LeBron being frustrated with Love because of his inability to reach out is purely talk. On countless occasions this season despite trying to find his role on the team, Love has said he wants and plans to remain a Cavalier whether they win a championship this season or not. Here’s a look at Love’s shooting percentages by month this season:

Everything that Love wants is available for him right here in Cleveland, so the likelihood of him leaving the Cavs for another team is slim to none at this point. It’s a shame that Love needs to keep repeating that he wants to stay a Cavalier, but all questions will be answered this summer. After all, it was less than a year ago at the start of the season that Love said this during the Cavs trip to Brazil:

After I was traded this summer, I kept hearing about how our challenge was going to be figuring out how to share the ball among LeBron, Kyrie and myself. Reporters kept asking me how I felt about it: Are you the second wheel? Are you the third wheel? What about your stats?

To them I say: I don’t care. I’ve never played in a playoff game. I came to Cleveland because I want to win. I’ll grab a broom and sweep the floors if it gets me an NBA title.