Why The Knicks Traded J.R. Smith and Iman Shumpert 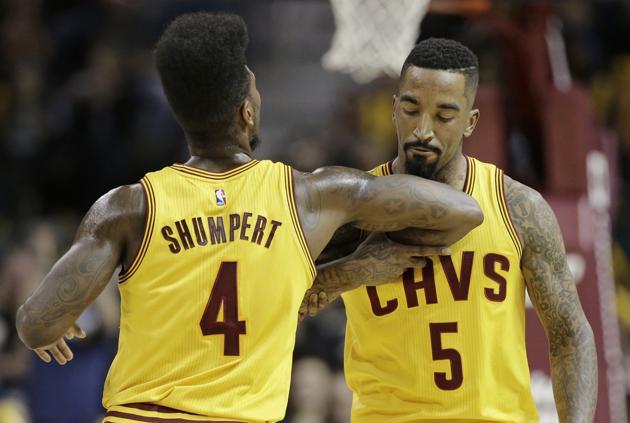 Last season, J.R. Smith and Iman Shumpert were inseparable. Both shared the same position when they played for the New York Knicks and nothing changed when they got traded to the Cleveland Cavaliers.

The Knicks were primed for a strong run but circumstances led them to yet another disappointing campaign, fortunately for the Cavaliers, David Griffin kept tabs on the situation in New York and when he got the opportunity, the Knicks’ trash became the Cavaliers’ cash. This came at what then seemed like quite a hefty price as the Cavs were forced to part ways with Dion Waiters.

In an ESPN piece, Phil Jackson provided a behind-the-scenes look on how things trickled down to them trading away Smith and Shumpert. Jackson faced a dilemma involving the Knicks’ trio of shooting guards in Smith, Shumpert, and Tim Hardaway as each player was underperforming. Ironically, the two-guard spot was supposed to be New York’s position of strength.

He was supposed to carry the scoring load for the second unit and he wasn’t doing the job. I also said that because of his unacceptable behavior, he had two strikes against him with this team. He didn’t really respond. He’s a very sensitive guy, with his big doe eyes. He looked like he was going to tear up. But he finally responded that he was going through some issues with his gal.

I asked Fish what players were the biggest distractions. He said that although J.R. never talked back to him, he always walked around under a dark cloud. Derek was worried that negative energy was contagious.

Smith couldn’t be more thankful for the move as he was able to resurrect his reputation in Cleveland. The talent was always there but the question was always on his focus. After the trade, the enigmatic shooter saw improvements in a number of significant areas but more importantly, he was at peace with his situation.

In the postseason, most people faulted Smith for his poor shooting against the Golden State Warriors but it needs to be pointed out that Cleveland also got tremendous help out of him when they faced the Chicago Bulls and the Atlanta Hawks. In those two series, Smith played at a different level and was undoubtedly “clutch” en route to solid numbers of 15.4 points, 5.6 rebounds, 49% field goal shooting, and a 44% mark from distance.

Iman Shumpert was also in a curious situation as he started the season on fire but a hip injury marked the beginning of his downward trajectory in the Big Apple. Phil Jackson had these to say about Shumpert:

After he suffered a hip injury in Dallas, his game went rapidly downhill. Did he have any other issues to explain his decline? He said, ‘No. I don’t know what has gone wrong with my game.’ As with J. R., nothing got resolved.

I like Shump but he has a very loud, big personality. It was difficult for most of the other guys to deal with, especially if things don’t go well for him or the team.

Shump’s numbers declined in the regular season as he started his Cavalier career recovering from an injury. From scoring 9.3 points per contest in New York, his production was down to 7.2 points in Cleveland but his usage rating went down from 20.1 to 15.6.

In the playoffs, Shump returned to his usual reliable self averaging 9.1 points, 4.9 rebounds, and 1.3 steals; all that while having a usage rating of only 12.7 but his most important contribution was on the defensive end as he became Cleveland’s main stopper – just ask Klay Thompson, the other Splash Brother, who was limited to a horrendous 38% field goal shooting and an atrocious 28% clip from beyond the arc in the NBA Finals against Shumpert.

In the end, New York stuck with Tim Hardaway as Phil Jackson saw more commitment from the second-generation player. While J.R. Smith and Iman Shumpert turned out to be very productive pieces for the Wine and Gold, the Knickerbockers weren’t left in vain as they still got what they wanted out of their inevitable breakup putting themselves in a better position financially.

The Knicks are currently looking at a better long term product of the trade with their cap flexibility but the Cavaliers are still in a position to make the most out of the productive years of Smith and Shumpert, both tremendous fits to the team. With Iman Shumpert now having his future in Cleveland secured, all eyes are now on J.R. Smith and his next move.