In today’s modern NBA, analytics reign supreme. How efficiently you score the ball, whether it is at the rim or from beyond the arc, how well you defend in different types of offensive sets, and even the pace at which your team scores are all things teams consider when designing schemes.

Speaking of pace, according to NBA.com the Cavs last season finished sixteenth overall in terms of offensive speed. This raises a red flag among NBA fans since the Golden State Warriors, Cleveland’s biggest rival, finished fourth last season in overall. With the recent additions of Derrick Rose and Dwyane Wade to the team, the Cavs have raised their risk of being an even slower paced team compared to last season. But, this may not be the worst possible scenario for Cleveland as they finished third overall, only behind Golden State and the Houston Rockets in offensive efficiency; so while they move at a slower pace, they are not wasting their offensive possessions. Despite the fact that they cannot keep up with the Warriors, the Cavs should not worry about their slower offensive pace.

While the Cavs offense last season was never extravagant,  breaking down to Kyrie Irving isolation or LeBron James finding an open teammate in the pick and roll or from behind the three-point line, this season will prove to be even more interesting. They obviously traded away Irving, someone who is quick to ignore his teammates, isolate, and dribble his opponent to sleep, and acquired Isaiah Thomas, a guard who can play a lot of off the ball, allowing a more traditional pace and space offense for Cleveland and to allow James to create more on the offensive side of the ball once Thomas recovers from his hip injury. To fill the void left by Thomas, the Cavs also acquired Rose and Wade, two players who have next-t0-no three-point shooting ability but are able to slash and attack the rim with relative ease. Cavs head coach Ty Lue has been trying to implement a more motion based offense during training camp that no longer relies on isolation scoring but instead plays to the strength of players like Rose, Wade, and James, allowing the team to play more towards their strengths while still maintaining their three-point scoring backbone. Another reason the Cavaliers should not worry about their offensive pace heading into the 2017-18 NBA regular season is the fact that they do have one of the older rosters in the NBA, averaging out at nearly 30 years old. With a slower offensive pace, the Cavs are able to maintain the health of their key players, mostly Wade, James, and Kevin Love. For the Cavaliers, the regular season is just a warm up and once the playoffs begin, so does their real season. Playing at a slower pace will not burn the team out and allow them to reach their goal of winning their second title in three years. Instead of forcing the pace, the Cavaliers should rely on situational awareness, and use the basketball IQ and tremendous outlet passing of Wade and Love to find guys like Rose and James in transition catching defenders snoozing.

Besides the fact that they have older players and a new offensive scheme, the most important reason the Cavaliers should not worry about keeping up with a team like the Warriors in terms of pace is they literally beat the Warriors two seasons ago by playing at a much slower pace compared to the Warriors:

It was never sexy, it was never high scoring but it got the job done and won Cleveland its first championship in 52 years. The following season the defending NBA champions squared off yet again with the Warriors and instead of sticking to their style of “bully-ball” they decided to try and keep pace with the breakneck Warriors and were soundly defeated 4-1 in the 2017 NBA Finals. This cannot happen again if the Cavs and Dubs are to meet for a fourth consecutive season as the Cavs were showing fatigue and falling apart at the seams when trying to keep pace with one of the best offensive teams in the league last time they tried to keep up with Oakland. Instead, they should settle in, draw out the shot clock, score efficiently and play smart team defense to win their second title in franchise history.

In the end, the Cleveland Cavaliers are a perennial lock to make it to the 2018 NBA Finals. They will not get there by playing with freakishly fast and high-volume scoring, but instead at a slow and methodical pace all while scoring at a highly efficient clip. While finishing last season in the middle of the pack in terms of pace, they will definitely be a lot slower due to the fact that their biggest additions in Derrick Rose and Dwyane Wade, their age and the overall construction of the roster will keep the Cavaliers from playing at a blinding speed like their biggest rival. If they keep up their sl0w, bully-ball style of play and redefine the series, the Cavs could see themselves walking away as NBA Champions once again. 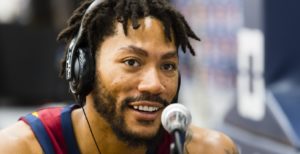