Why The Cavs Should Limit Anderson Varejao’s Minutes and Games 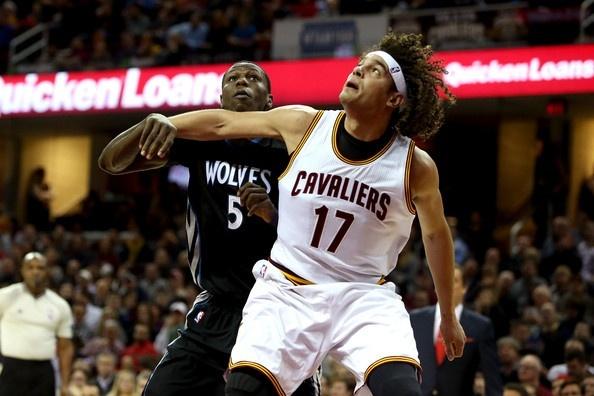 Anderson Varejao is the longest tenured player on the Cleveland Cavaliers and a fan favorite. Whether it’s his floppy hair, endless energy, diving on the ground for a loose ball, or stepping up and taking a charge, it always seems he is doing something positive for his team. However, he needs to be on the floor to actually help out his teammates.

Andy has been a spectator more than he has been a player during the last five seasons. He has played in 172 out of a possible 394 games: just 43%! He is missing time with all kinds of injuries at an alarming rate. In the 2010-11 season, he tore a tendon in his right ankle. During the 2011-12 season, he broke his right wrist. Throughout the 2012-13 season, he suffered from a blood clot in his lung- obviously no one can fault him as this a life threatening issue greater than basketball- he appeared in 65 games, missing games due to a sore back in the 2013-14 season. Finally, during the 2014-15 season he tore his Achilles in December and missed the rest of the season.

However, his health has not been more instrumental to his team than it will be this year. Other than last season, the Cavs were not expected by many around the league to be very good, let alone make the playoffs. The most games the team won in those five seasons was 33 games in the 13-14 season, so even if he were to play in every game, he was not likely the difference for them to make the playoffs. Whether he plays in all 82 games or in 35 (42.6 percent) the team will be in championship contention. Which leads to the question: Should the Cavs limit Andy’s games and minutes this season?

The simple answer to this question is yes. The Cavs much like the San Antonio Spurs of the past few years or the Boston Celtics in their ‘big 3 era’ are not playing for the regular season. The team is playing for the playoffs. While the Cavs ultimately want the top seed in the Eastern Conference, they aren’t likely to overexert their players to do so. In order to get back to the Finals or even win the championship, they will need all their key players healthy. Andy figures to be a key player this season, as he has been since joining the team; however, the Cavs have no excuse to let Andy play himself into an injury. With Timofey Mozgov, Kevin Love, rookie center Sasha Kaun, the Cavs have enough size and rebounding to limit Andy’s games this season. Not to mention Tristan Thompson, who everyone expects to eventually join the team. With the league trending towards small ball the Cavaliers also have LeBron James, James Jones, and Richard Jefferson to play the small ball power forward spot.

The Cavaliers are loaded with talent and have players that can make up for Andy’s contributions on paper. There is no question that the Cavs will come out flat and lethargic during a handful of games this season, where they will need that punch in the arm that Andy gives. As stated above, he’s earned his fan favorite status for doing the little things that gets the crowd going. This gives his teammates energy and may even make them play harder. But with his injury history and age (33), the Cavs should limit those games.

Andy has shown throughout his career to be a tremendous pick-and-roll defender with his hard hedging and active hands. A skill most big men struggle doing. He is also a very skilled defender and can switch onto the ‘smaller players’ and not get burned by, a skill that is very important in today’s NBA of small ball lineups. He also keeps possessions alive by tipping a loose rebound to a teammate, which has likely reflected onto Thompson over his career. Andy has also shown he is very capable of a consistently hitting 10 to 16 feet jump shots. While last year was a small sample size, he shot 15 percent from that range, compared to the league average of 10 percent, according to basketball reference. This could be another dimension the Cavs can use in their offense.

The Cavs play 19 back-to-back games this season, and Andy should be forced to sit out every game on the backside of the back-to-back. Furthermore, he has averaged almost 26 minutes a game for his career. There should be no scenario in which he plays more than 20 minutes at least until the playoffs. Andy is the player you love to have on your team but hate if he isn’t. He can get under opposing player’s skin and can mentally be irritating for them. While this isn’t something that is noticeable on paper, it can change the momentum of a game in an instance. His hustling and endless energy could be the difference come playoff time, as he has done so in the past. The Cavaliers need to ensure that they have that ability in the post season.