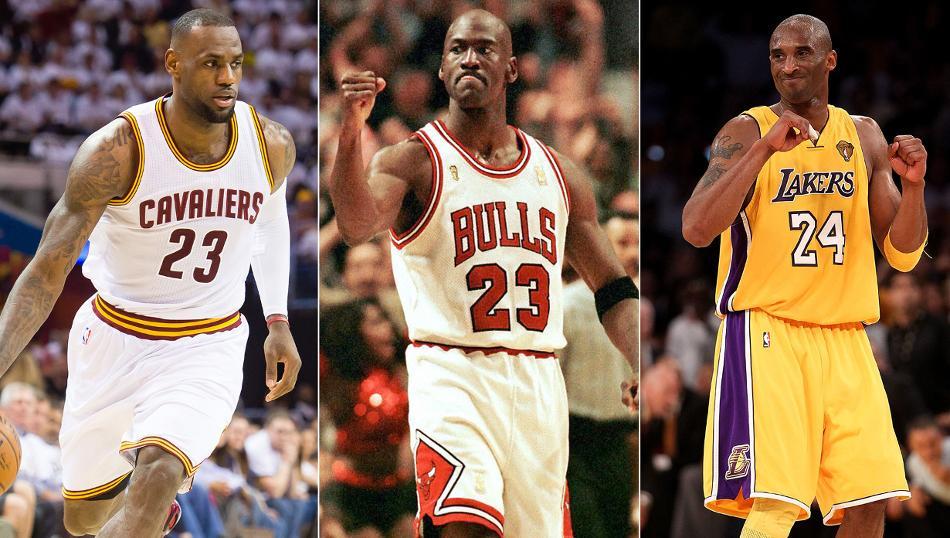 The LeBron James/Michael Jordan/Kobe Bryant will never die. The comparisons between LeBron James and Michael Jordan are more of a hot topic lately with the recent decline of Kobe Bryant. James and Bryant are more like peers because they have been playing in the league against each other for the 13th season now. The intrigue between LeBron and Jordan, of course, comes as LeBron looks like a legitimate threat to take away the crown from Michael Jordan as the ‘GOAT’ (Greatest Of All Time).

At the age of 30 and going into his 13th season in the NBA, LeBron James has career averages of 27.3 points per game along with 7.1 rebounds and 6.9 assists. 27, seven, and seven are easily Hall of Fame statistics and any player would be more than ecstatic to average this for a 13-year career.

These debates between James and Jordan heated up this summer when both players went on record picking themselves to win against each other. And why wouldn’t they? Alpha male athletes of this stature and that have accomplished what they have accomplished in their careers are not backing down. We all know that Jordan has six rings. He went six for six in Finals victories to trips, which is an amazing feat. Kobe Bryant has a total of five rings. Three rings with Shaq and two rings without him. These two are forever cemented as top 5 greats in the NBA forever, that much is clear. LeBron James has two NBA championships. He won those rings in 2012 and 2013 playing alongside Dwyane Wade and Chris Bosh with the Miami Heat. He has been to the Finals a total of six times which means that James is 2-for-6 in NBA Finals victories to trips. That could be considered a blemish to James’ NBA resume and bid to be the greatest. However, he still has a legit shot at being the greatest ever. He has plenty of game and time left. He is only 30 years old and is in an amazing situation right now with the Cleveland Cavaliers to add to his championship hardware. Let’s take a look at a few reasons why LeBron James gets the nod over Jordan and Kobe.

Let’s take a look at the two rings he won in his four years with the Miami Heat for a second. The Miami Heat made trips to the NBA Finals each of the four years LeBron James played for the organization. One could argue that with a healthy Wade and Bosh that LeBron could have legitimately won four rings with the Miami Heat and possibly still have been playing for the organization. A recent article on SI.com recently broke down the situation in Miami to a tee.

“Some might look at LeBron’s Heat tenure as pointing to a unit that was intentionally unbalanced. The coalescing of that Big Three was, after all, an enormous financial investment, one that required foregoing much in the way of ancillary support. However, the issues here were more about the physical fragility and decline of Wade and Bosh than the players around them. In the four years before they teamed with LeBron, Wade had a BPM of 8.3; Bosh, 2.7. During their four seasons together, Wade wound up at 4.7, and Bosh at 0.6. That’s not to say the Heat failed at stocking their roster with respectable veterans. Rather, it was the decline of an injury-nagged Wade, combined with Bosh’s restricted offensive role, that rendered Miami’s Big Three less of a unstoppable force than many believed they’d be.”

The Big Three were supposed to be the unstoppable force that was supposed to win not one, not two, not three, not four championships according to LeBron himself. They all went down there with intentions of running through the NBA and winning ring after ring. Unfortunately things did not work out that way. If LeBron would have won a ring every year he was in Miami and was still down there many NBA fans would be saying he is a greatest of all-time. However, his losses are talked about and eventually hurt his basketball resume.

Now let’s take a look at the production of all three players and how LeBron shines and stands out over both Jordan and Kobe individually on the court. Note, this is individually not team wise. LeBron James arguably has the highest basketball IQ of the three and is one of the most efficient player to ever lace up a pair of sneakers and step on to the basketball court. He plays any position 1-4 on the basketball court. He scores, rebounds, drops dimes, plays the passing lane, defends your best player, and controls the overall tempo of the game on a nightly basis. If you have ever had the luxury of seeing LeBron play in person, you will see this for yourself. LeBron’s production in the NBA Finals individually stands head and shoulders over both Kobe Bryant and Michael Jordan. A recent article in SI.com broke this down for fans to really get a good picture on the magnificence LeBron displays on the court.

“Jordan’s supporting cast for his six NBA Finals teams yielded an average impact of +4.3 points per 100 possessions. (This is much higher than what I found, in part because Paine only weighted with minutes played during the playoffs through the Conference Finals.) LeBron’s, meanwhile, came in at +2.1. Because Paine’s statistical plus-minus model considered Shaq to be the Lakers’ best player during their first three Finals appearances, I wasn’t able to fully calculate Kobe’s, but just looking at 2004 and 2008–2010, Kobe’s supporting casts averaged a net impact of +4.1.

“Again, this it not to argue that LeBron is better than either Bryant or Jordan. But even given the chicken-egg nature of box score-based metrics, the numbers scream pretty loudly that LeBron has been more productive than either Kobe or Jordan, and has done so with significantly less help from his supporting cast. As such, anyone seeking to end the G.O.A.T. argument at “RINGZ” at least would be wise to consider how LeBron might’ve fared had he entered those four other Finals with more firepower at his side.”

Who knows how LeBron James would have fared with a healthy more productive supporting cast for those Finals he lost. He could be six for six just like Jordan is and then the argument would get really interesting. As great as Kobe is, this argument ends up always comes down to Jordan and LeBron. The rest of LeBron James’ career will be an interesting narrative to say the least. Can he win a ring in 2015-2016? Will he tie Michael Jordan and get six rings? Will he even tie Kobe Bryant and get five rings?

These are all questions that remain unanswered and only time will tell. Fortunately, time is something LeBron still has on his side despite getting older every year and he is sitting in a pretty good position with a championship contender in the Cleveland Cavaliers. This season should be very entertaining.