Why January Is Vital For Cleveland’s Championship Hopes 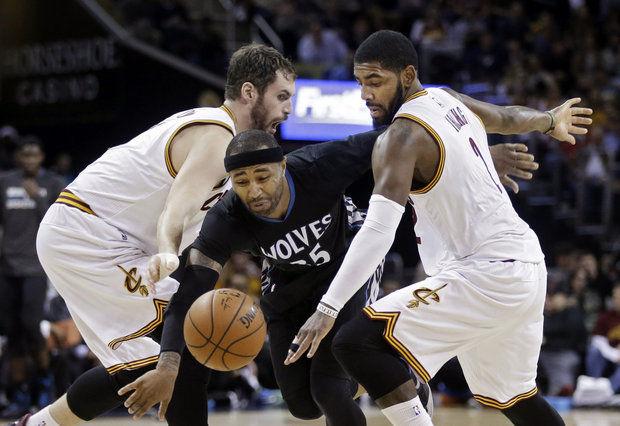 If you haven’t heard by now, LeBron James is going to miss 2 weeks of basketball. So far, he hasn’t even been with the team during his rehab for a strained left knee and lower back. These are injuries that have hindered him for a while now, but James decided not to sit out for an extended period of time until now. Some of the public has criticized James for sitting out, but head coach David Blatt thinks otherwise:

Blatt: "A lot of things were said unfairly, I think. The guys been playing with a lot of pain, or some pain, and we just decided, ‘Enough.’"

Before this season, he has never missed more than seven games in a season. Now, having played the most regular season minutes (34,364) and postseason minutes (6,717) than any other player before reaching age 30, James has decided to listen to his body and rest until he can come back at full strength for the Cavs.

Anderson Varejao has had a career riddled with injuries, including a left knee patella tendinitis and a left high ankle sprain in 2004-05, a torn tendon in his right ankle in 2010-11, a broken wrist in 2011-12, a serious blood clot in his lung during his career year of 2012-13, back soreness for over a month in 2013-14, and now a torn left Achilles has cut 2014-15 season short. Varejao has always been an important piece to the Cavaliers, but missing his presence on both ends of the floor has been tough for the Cavaliers to replace thus far.

After a losing three consecutive games before skidding by the Hornets and being pummeled by the Mavericks, reports surfaced that David Blatt did not have the trust of his Cavalier players and was possibly on the hot seat. Here’s what James and Kyrie Irving had to say about the rumors they’re calling bogus:

LeBron James' full response when told an endorsement of coach David Blatt would carry a lot of weight: pic.twitter.com/FPArIYZHpt

Kyrie Irving, on the other hand, was strong in his support: "I'll do anything for Coach Blatt and I know players share the same (sentiment)"

Injuries and coaching distractions could not have come at a worse time for the Cavaliers. Cleveland has its toughest month coming up in the 2014-15 season in January, where they’ll play 15 more games; Of those remaining games, 11 are against Western Conference opponents, most of whom are in the playoff hunt:

With the Cavaliers in 5th place at 19-14 just 5 games ahead of 8th seeded Miami, they’re in a dangerous spot with eight home and eight road games left this month. After a home matchup against the Houston Rockets, Cleveland has a tough five-game road trip in a span of eight days, including games against the Warriors, Suns, and Clippers. This trip could very well help the team and their coach find their identity as LeBron James isn’t expected to return at the end of that trip or even after. Kyrie Irving and Kevin Love will have to be leaders now more than ever because losing these big games would not only hurt the Cavaliers in the standings, but also nearly dissolve their championship expectations. Tristan Thompson will have to continue his recent excellence in Anderson Varejao’s stead. Thompson has been averaging a double-double every game since Varejao’s injury, and will have tough matchups against Dwight Howard, Josh Smith, DeMarcus Cousins, Blake Griffin, DeAndre Jordan, Serge Ibaka, and LaMarcus Aldridge to name a few. David Blatt will also be tested this month when he’ll be going up against some of the best coaches in Rick Carlisle, Doc Rivers, and Scott Brooks.

Late in December, the Cavs were blown out at home by the lowly Detroit Pistons and the shorthanded Milwaukee Bucks. The Cavs are playing the struggling Sixers, Lakers, Hornets, and Timberwolves this month, which could all pose as similar trap games for them. The Sixers blew out the Heat in Miami, the Lakers beat the Warriors down at home without Kobe Bryant, and the Timberwolves defeated the Trail Blazers as well, so these are sleepers the Cavaliers shouldn’t underestimate.

Free agents are expected to make their decisions this month. Kenyon Martin, Jermaine O’Neal, and Emeka Okafor have all been mentioned as free agent targets for the Cavaliers. All of these players are nearing the end of their careers, so they’ll want to play meaningful minutes for a championship contender. This month will be vital for Cleveland, as they must reestablish their championship-or-bust mentality and show free agents it’s a legitimate candidate.

Many have written the Cavaliers off from playoff contention this season as a result of injuries and supposed coaching issues after blowout losses to Detroit, Atlanta, and Milwaukee. However, they also have victories over Chicago, Toronto, Atlanta, Washington, and Memphis along with close losses to the Spurs and the East-leading Hawks, so one can only think that Cleveland is on the verge of figuring out how to win as a unit. Also, seven of the games against Western Conference opponents will be nationally televised, giving the Cavaliers a chance to show that they can compete with the best on a national level and are indeed serious contenders for a championship. The way the Cavaliers have been playing, it seems reasonable to think that they could fall in the standings because of some of the tough teams they’ll be facing. However, if there’s any time for the Cavs to start stringing together impressive and meaningful victories, it’s in January.