Why David Blatt Should Have Won Coach Of The Year 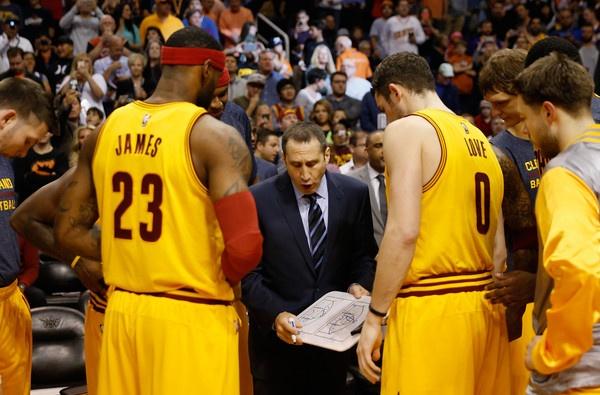 The competition for this year’s NBA Coach of the Year has proven to be a deep one with achievers such as Steve Kerr and Mike Budenholzer (this year’s winner) grabbing the spotlight because of the regular season success of their teams. Outside of the two, one particular bench tactician has gone through a whirlwind of an experience in just his maiden NBA season and that is Coach David Michael Blatt of the Cleveland Cavaliers.

For a bit of background, Coach David Blatt signed with the Cavs with the expectation of leading a young group of basketball players to meet their potential while, at the same time, growing up with the team. It’s ironic to use the term “growing up” as Coach Blatt has two decades worth of coaching experience and a myriad of success in every stop.

However, everything he expected to welcome him was thrown out the window when LeBron James decided to return to Cleveland, opening up an entirely different approach for Blatt in his first NBA season and it was further solidified by a series of front office moves that thrusted the team to “win-now mode”. Coach Blatt has had his share of ups and downs. His arrival was met with mixed reactions. He was praised by his veteran players led by Mike Miller who labeled his offensive schemes as borderline genius. Outsiders doubted his control over the team. Those same outsiders even instigated that his job was on the line. Then he finally got a semblance of approval by his most influential player.

Some might say that Coach Blatt was simply in the right place at the right time with all the roster moves the Cavaliers had to go through. But whoever’s part of the Wine and Gold lineup, no matter how talented they are, they still need a voice to steer the ship. Not LeBron James’ but Coach David Blatt’s. The NBA has seen incredibly deep and talented teams falter when it mattered most and a handful of the blame goes to chemistry. Good chemistry is predicated by having a leader whose able to maximize the pieces that he has at hand. He is tasked to design the team’s identity and make the players buy in to what he’s preaching. With the way Coach Blatt has taken on that responsibility, and succeeded, all doubts on his undeniable and significant contribution to the Cavaliers’ success should be out of the question.

The Cavs started their turnaround in a win over the Lakers in January but that event went on to be vividly remembered for an unexpected move from Coach Blatt that definitely helped the team swerve into a different zone coming into Staples Center. Instead of going to practice, he took the team out bowling. The rest was history but that decision showed everyone how he’s able to come up with out-of-the-blue solutions. He’s also known for a couple of unpopular in-game strategies when he was benching Kevin Love while also giving sporadic minutes to Timofey Mozgov during fourth quarters. These two moves showed everyone how Coach Blatt paid zero attention to what’s popular and solely focused on what gives the team the best chance to win in the long run.

People should be reminded how, in a way, the great LeBron James also resorted to the unpopular decision of passing up game winners for the right basketball play and better look at the basket.

Being Coach of the Year should not warrant a dazzling win-loss record alone. Two former winners in Scott Brooks and Sam Mitchell deservingly took home the award despite their teams having worse records [in the seasons when their coaches won Coach of the Year] than the Cavaliers this season. There’s no need to discredit the incredible effort of Coach Steve Kerr and Coach Mike Budenholzer in leading their respective teams to franchise-best regular season campaigns. But the Cavaliers’ head coach has displayed, in one season, a number of sterling qualities given the different situations that he had to endure and eventually coming up with exemplary results. All these spelled excellence and uniqueness in his first season at the highest level of basketball.