Why David Blatt Deserves Coach Of The Year Award 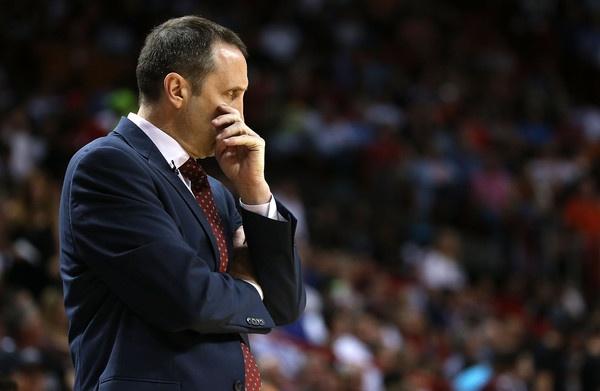 As the NBA’s regular season is rapidly approaching its end, teams are trying to finish strong for a good playoff seed. Along with the playoffs come the regular season awards, which includes Coach of the Year. The coaches we predict are most likely in the running are Cavs coach David Blatt, Warriors coach Steve Kerr, Hawks coach Mike Budenholzer, and Grizzlies coach Dave Joerger. All of these coaches are certainly deserving of the award, but no coach is more deserving than David Blatt, head coach of the Cleveland Cavaliers.

Blatt has the Cavaliers locked into the number two seed in the Eastern Conference and they have also clinched the Central Division title as well. Of the four men mentioned, two of them are first year head coaches: Blatt and Kerr. The first year success that these two coaches are having can be detrimental to the chances of the other two candidates. Despite being in excellent playoff position, Budenholzer and Joerger are each in their second season with their respective teams.

When looking at Coach of the Year award, you want to look at team success and how much the team has improved from the previous year. All four teams are having great seasons, however one team does not seem to fit in with the rest of the group. The Cavaliers, Hawks, and Warriors have made huge improvements from last season. That leaves out the Memphis Grizzlies. Their head coach, Dave Joerger, currently has them seeded second in the Western Conference with a record of 53-25. That is an outstanding record, but it is not substantially better than their record from last season. The Grizzlies finished last season seventh in the West with a record of 50-32, and we fully expect them to stay a top-five team in the West, but Joerger hasn’t had any really stand-out coaching performances that would put him above the rest of the competition.

That leaves Blatt, Kerr, and Budenholzer. Coach Bud has done an astonishing job with the Atlanta Hawks this year. They have the best record in the East at 59-19 and have improved their win total by 21 games compared to last season. But Mike had a whole year of experience under his belt as the head coach of the Hawks and even more experience with the San Antonio Spurs.

Steve Kerr is one of those coaches who had a lot of pressure this year as a first year head coach of the Golden State Warriors. The reason he had all of this pressure was because the Warriors had a record of 51-31 last season and still fired Coach Mark Jackson at the time. In most cases, you do not fire a coach that leads your team to 50 wins and the playoffs. Kerr, with the pressure to build off of the success of Mark Jackson, has managed to lead the Warriors to a surprising 63-15 record, which is best in the NBA. However, the best record in the NBA and franchise record for wins; not to go unnoticed, but does not deserve Coach of the Year award.

The man that deserves the award of Coach of the Year is David Blatt. What he has done this year with the Cleveland Cavaliers has been impressive. This is his first season coaching in the NBA, however he does have previous coaching experience with Maccabi Tel Aviv. He accrued a record of 208-55 in four seasons with Maccabi.

Once LeBron James signed with the Cavaliers in the offseason and they traded for Kevin Love, the expectations went through the roof for Coach Blatt. The Cavaliers were beginning to look like they were wilting under the pressure as they only compiled a 19-20 record through the first 39 games of the season. Since then, they have been on a tear reeling off a record of 32-7 and now sit second in the Eastern Conference at 51-27.

In addition, the Cavaliers made a mid-season trade to help them, which also created a little bit of adversity for Coach Blatt. He had to incorporate all of these new players into his system all while dealing with championship expectations. He has led a Cavaliers team, who have not had a taste of the postseason in four seasons, to an improved record by 18 wins already, a Central Division title, and most importantly, a playoff berth and that is why he is the most deserving of the Coach of the Year award.