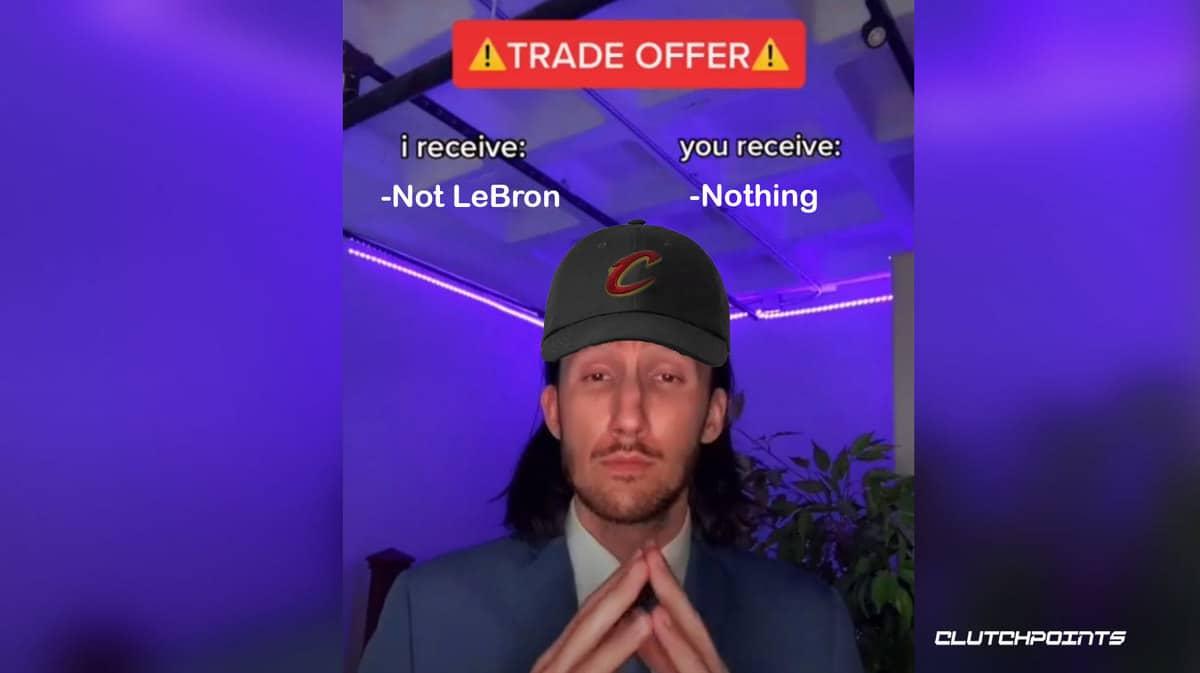 Normally, this wouldn’t even be a question for the Cavs.

But it seems recent developments have put Los Angeles Lakers forward LeBron James and a potential departure from one of the league’s most historic franchises at the forefront of NBA headlines.

James said he had “multiple thoughts” about his team’s current performance following a 112-98 loss to the Miami Heat, saying he didn’t want to finish his career “playing at this level from a team aspect” as he still tried to compete for championships after 20 seasons in the NBA.

“That has always been my passion, that has always been my goal since I entered the league as an 18-year-old kid out of Akron, Ohio. And I know it takes steps to get there, but once you get there and know how to get there, playing basketball at this level just to be playing basketball is not in my DNA. It’s not in my DNA anymore. So, we’ll see what happens and see how fresh my mind stays over the next couple years.”

James even game a cryptic update on his future when asked how much longer he planned to play in the league.

“I don’t have a number,” James said. “I know as long as my mind stays in it, I can play at this level for a minute. Now, that’s up to my mind. My body is going to be OK because if my mind is into it, I will make sure my body is taken care of and I’ll continue to put in the work.”

The 37-year-old forward acknowledged that he hadn’t “closed the door” on a possible return to Cleveland in February, with Athletic senior columnist Jason Lloyd telling readers to “buckle up” after James’s contract expired in the 2022 offseason.

“The door’s not closed on that,” James told The Athletic. “I’m not saying I’m coming back and playing, I don’t know. I don’t know what my future holds. I don’t even know when I’m free.”

It doesn’t seem like trade speculation or buzz around James suiting up with the Cavs for the third time in his career will die down any time soon.

So, as reasonable Cavs fans, let’s talk about it while the rumors run rampant.

Should the Cavs trade for LeBron James in the offseason?

If it ain’t broke, why try to so desperately fix it?

This young Cavs team may need more of a consistent punch on both sides of the floor to really take them to the level of championship contention, but the team has already hit fourth place in the Eastern Conference and have surpassed where they were at this point last season. Cleveland currently possesses the best defensive rating in the league with 107.8, anchored by a 24-year-old center the team’s head coach has repeatedly called a Defensive Player of the Year candidate. They may lean on them too heavily at times for scoring help, but the Cavs possess two 20-point per game scorers in guard Donovan Mitchell and Darius Garland, one of whom was drafted by Cleveland with the fifth-overall pick in 2019 and was tasked with shouldering the increased burden of becoming the team’s lead distributor at 22 years old.

The Cavaliers and President of Basketball Operations Koby Altman built a delicate balance in the books that will keep three of the team’s most impactful starters in Cleveland while somehow staying just below the NBA luxury tax. Guard Darius Garland’s extension runs until the 2027-28 season, center Jarrett Allen is locked down until 2025-26 and guard Donovan Mitchell has a player option in the same year. Should forward Kevin Love and guard Caris LeVert decide to take less money next offseason, the Cavs could very well stay under the luxury tax threshold and still try to compete for an NBA championship while the main core has a full year together under their belt.

The answer to this question should always be a quick and resounding “no.”

Not only because the cost would be unspeakably high for the Cavs, but because the Lakers quite literally can’t trade him this season.

James signed a two-year, $97.1 million contract extension with the Los Angeles Lakers in August, paving the way to what could be the largest single-season salary of his NBA career, according to Spotrac. His contract is estimated to hit $46.9 million in the 2023-24 season, or 35% of the league’s salary cap, with the possibility of a salary increase depending on the 2023-24 salary cap before moving on to a $50.7 million player option in 2024.

Though he was unable to include a no-trade clause in his most recent contract, the NBA’s most recent Collective Bargaining Agreement states players cannot be traded until six months after a contract extension. James’s August 17th announcement date would put his availability just past the Feb. 9th trade deadline, meaning the Lakers wouldn’t be able to trade the 18-time All Star until next offseason.

Even if the Lakers had a small window to bring LeBron James back to The Land, the cost would be to far too high for the 37-year-old forward should the Cavaliers still try to contend for an NBA Championship.

The trade market explosion may have died down from what it was over the summer, but blockbuster trades by the Atlanta Hawks and Minnesota Timberwolves could still have an effect on the asking prices for All-Star level players. The Hawks paid a hefty price of three first-round draft picks, a first-round pick swap and forward Danilo Gallinari when they traded for San Antonio Spurs guard Dejounte Murray, a player whose fit and chemistry with guard Trae Young sparked rumors that the former fifth-overall pick in 2018 could ask for a trade. The Timberwolves traded five players, four first-round picks and a pick swap in 2026 for center Rudy Gobert, only for them to sit at the 11th seed in the Western Conference as the team still tries to find his fit with center Karl Anthony-Towns and guard Anthony Edwards.

Though the Cavaliers list seven total players, Cleveland still managed to break Mitchell’s initial expectations and keep three out of its five starters, including a Rookie of the Year in center Evan Mobley. Aside from two larger contracts in Love and LeVert’s, both of whom will become unrestricted free agents should the Cavs choose not to resign them, the team will likely have to give up much more than they will get in return for LeBron James.

The Cavs may fully own their first-round pick in 2024, but it could be protected under the Ted Stepien rule. All of their other picks until 2029 are either swaps or are owed to the Utah Jazz, per USA Today.

As interesting as it may seem to think about a third return to Cleveland, it will take a nosedive situation for the Cavs to even consider talking to the Lakers about a trade for LeBron James.

We won’t really know until it happens, Cavs Nation. All we can do is wait and hope for the best.