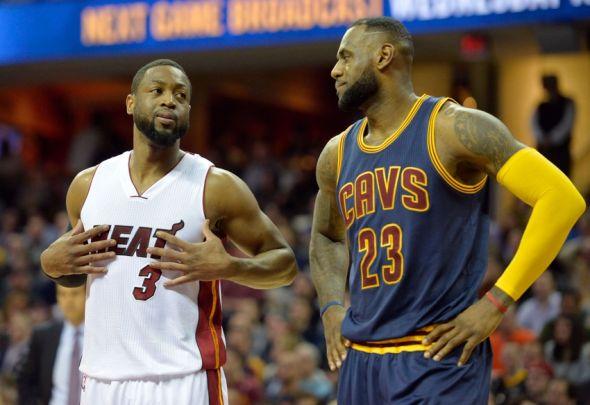 The free agency period opened on July 1st and of the many rumors going on around the league, Dwyane Wade to the Cavaliers this offseason was one of them. The speculation about that could be traced all the way back to the Cavaliers-Heat game on Christmas Day. After the game concluded, LeBron and Wade embraced for a hug and LeBron was caught on national television saying,

“Like I said, if we aren’t better this year, we’re going to reunite and do some bigger and better things, alright?”

Wade seemed to agree. Many thought this was a sign that LeBron could go back to Miami. However, it was clear in LeBron’s letter when he signed that he was never going to leave Cleveland again. Towards the conclusion of the NBA Finals, it shifted to the possibility of Wade joining LeBron in Cleveland.

Wade had an opt-out clause in his contract and many did not expect him to opt-out. Wade’s dad was seen wearing a Cleveland Cavaliers t-shirt that just fueled the rumors that Wade would head to Cleveland. Wade did opt-out of his contract and it started to become a real possibility that his days in Miami might be coming to an end. However, reality hit and he resigned with Miami on a one-year deal. Heat lifer Wade was not going anywhere. That leaves the question; did the Cavaliers need Dwyane Wade to win? Even without Wade, the Cavs roster looked good going into next season.

Obviously, having Wade on the roster would make a difference. He is an 11-time NBA All-Star and a three-time NBA champion. He still is capable of having thirty point games if it is really needed. The Cavaliers just recently re-signed Iman Shumpert, so if they got Wade too, there would be a big question as to who starts at the two-guard position? That is where Wade’s age and injury history comes into play. He is 33 years old, turning 34 next season, and his injury history suggest that it would be better if Wade came off the bench if he played with Cleveland. James has said that Wade is one of his best friends and that their friendship is more than just basketball. When you have that type of bond between two teammates, the on-court chemistry is irreplaceable and everyone saw that from the time they spent together playing in Miami.

Although Wade is an outstanding player and will most likely be a first ballot Hall of Famer when his career is over, it is blasphemous to think that the Cavaliers need him to win. When the rumors started going around that he could possibly sign with Cleveland, it was a nice thought from a fan perspective, but realistically there was no way that they could afford him unless he took a major pay cut as he had the past couple of seasons. They most likely would have had to move some players and to give away some good, young player or players for an aging Wade with bad knees, may not have been the b est decision by Cleveland. The Cavaliers, coming off an NBA Finals loss, have brought back most of their roster from last season and are in the process of adding other key role players. They will do just fine without Mr. Wade.