Who Will Be Left Out Of The Cavs’ Big Man Rotation? With the re-signing of Kevin Love, the potential re-signing of Tristan Thompson, picking up the option on Timofey Mozgov, the improved health of Anderson Varejao, as well as the signing of Russian big man Sasha Kaun, the Cavs have a bit of a log jam down low. The bad news is that Coach David Blatt still only has 48 minutes to divide between these guys, but the good news is that they are all serviceable players who give our frontline some much needed depth after a very unhealthy 2014-2015 season.

If they can stay healthy, this will be the first full season for the bigs to play together. Having lost Varejao early in the season, then picking up Mozgov at the midway point, then losing Love in the first round of the playoffs, this group should definitely see their chemistry grow. Each of them, with the exception of Kaun, has proven themselves at the NBA level, so the dilemma for the coaching staff will once again be finding the right combinations of players and minutes to give the Cavs the best chance to win.

Kaun will likely have the most difficult time finding minutes. He is a 27-year-old rookie with experience playing for Coach Blatt, but has never seen the speed or physical nature of the NBA. The health of Varejao will likely play a role in his playing time because his size and strength could be useful as a backup to Mozgov. He would struggle to play the power forward spot though, given the matchups he would see on the defensive end.

The health of Varejao, Love, and Mozgov are also question marks for the Cavs. These three have all undergone surgery in the past 12 months and none of them has played since their surgery. Varejao’s injury was the most serious, but we still don’t know how Mozgov’s knee is going to react to a full season after surgery, or how susceptible Love’s shoulder is to dislocating again. But the fact that we have five serviceable bigs is a very good thing.

Thompson is currently the guy who has shown the most consistency in a Cavs uniform. He was our most reliable rebounder and defender in the playoffs. He has also been able to stay away from injuries. His contract situation is complicated and is taking too long for the Cavs front office to sort out, but hopefully he can be locked up long term so that he doesn’t spend his season answering questions about Toronto in 2016.

The frontline will certainly be revamped with better health and the addition of Kaun, but the season and the opponent will likely need to play out in order to lock in a consistent rotation. It isn’t out of the question to say that Love and Thompson could play a lot of minutes together either. These two could present major complications for opposing front lines because of Love’s shooting and both of their rebounding skills. Only time will tell how Coach Blatt utilizes these big guys, but the good news in the preseason is that we will have all of them healthy and ready to play when the regular season tips off. 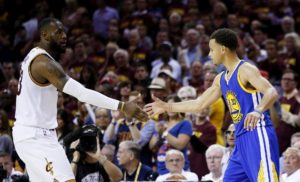