With training camp only a days away, ESPN has released its first power rankings for the 2015-2016 NBA season.

After being hailed by Vegas as the odds on favorite to win the title next year despite coming off a draining loss at the hands of the Golden State Warriors in the finals, the Cleveland Cavaliers are now seen in a slightly different manner by ESPN’s Marc Stein who puts them at number two.

“The NBA Finals don’t start for another 250 days, but I can’t find a soul who thinks LeBron James and his Cavs won’t be in them. Kyrie Irving, Kevin Love and Anderson Varejao can all take it slow on their respective comeback trails if necessary, because there’s not even a clear-cut No. 2 in the East to give ’em a push.”

This is highly debatable as Cleveland is expected to parade last season’s core, and more, when they visit Chicago on Opening Night. Meanwhile, ESPN’s top team at this point, the Golden State Warriors, have not made much noise this offseason although they remain to be intact.

“The Dubs really shouldn’t be insulted by Vegas’ fondness for the Cavs as title favorites, because the advantage tied to playing in the East is that significant. Yet you can also understand why they’re looking for any slight they can find, because going back-to-back is going to be that hard. As good as they are.”

No disrespect to Golden State even though they did beat a big three of LeBron James, Matthew Dellavedova, and Tristan Thompson, but the continued improvement of their MVP, Stephen Curry, and sophomore coach, Steve Kerr, should bode well for their hopes of a repeat.

All these are bound to change after a while, especially when Kevin Love and Kyrie Irving finally gets their groove back, but the best part of it all is that it only signifies that the 2015-2016 NBA wars is finally upon us. 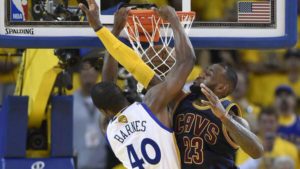