Was Kyrie Irving Overconfident In Saying Cavs Are The Team To Beat? The NBA Playoffs are right around the corner, and our Cleveland Cavaliers have some unattended business to tend to. With the trainers and coaching staff taking a cautious approach, it seems the Cavs will go in with a full strength squad ready to fire.

Confidence also seems to be on the high, with Kyrie Irving having some very strong words about how he sees the team and where they are headed.

Irving: “Everything surrounding our team is just crazy to think that we’re still in first place and we’re still the team to beat, honestly. Regardless of what anybody else says, what we need and what we don’t need to get better at. Us internally, we know we have to improve on a lot of things, but just have to handle business as professionals, just continue to get better.”

Reporter: “Is that the team to beat in the East or are you talking overall?”

Irving: “I feel like we’re the team to beat. Honestly it’s open season until we get into the playoffs. I have a lot more confidence than I think anyone realizes in our team and what’s going on in our locker room.”

This should be really exciting to hear for every single Cavaliers fan world-wide. With so much speculation about every inch of the Cavs this season, it’s great to hear right from the horse’s mouth that the confidence is sky high inside that locker room.

To a point Kyrie is right. It’s crazy to think that with all the expectation and reporters covering every single move happening in Cleveland, we still sit pretty at #1 in the East. The Raptors have been on their tails all season, crushing just about every franchise record there is, and even eclipsing 50+ wins for the first time in the clubs history. But they still sit behind our ‘underachieving’ Cleveland Cavaliers.

In the Eastern Conference, the Cavs are still the team to beat. Even in a tough Central Division, where three of the five teams will make the playoffs, the Cavs will go into the post season with the #1 seed. If the playoffs started today, the Cavs would face the Indiana Pacers. The Cavs hold the season series at 3-0 with another pivotal game to play in Indiana on April 6th.

As for Kyrie thinking Cleveland would be the team to beat in the entire league, he’s not entirely wrong. The Cavs hold the league’s third best record at 54-22 with six games left to play. (If the Cavs are to win four of their last six, it would tie them for the third best season record in Cavaliers franchise history.) The Eastern Conference is much improved looking at the standings. If you were to take the East’s ninth placed Chicago Bulls and put them in the Western Conference, they’d be sitting pretty in seventh position and preparing for a playoff run against the San Antonio Spurs.

Saying that Kyrie isn’t completely wrong in his statement, he’s not completely right either. The Golden State Warriors will go into the playoffs on an incredible high if they are to achieve their goal in their quest for 73 wins. They’re highly entertaining to watch and play that game at a completely insane pace, leading to only seven losses to this point in their season.

Looking back on the Warriors losses is interesting. They took losses to the Lakers and Nuggets, both of which will not make the playoffs in a weaker Western Conference. Another two of their losses came to our Central Division rival Detroit Pistons and Milwaukee Bucks. To those that think that the Dubs are unbeatable, that is definitely wrong.

In my opinion the Golden State Warriors remain the team to beat in the entire NBA, but the Cavs are that team in the Eastern Conference. Something else that also remains with the Warriors, is the bullseye target on their back. Every team is gunning for them, and LeBron James and the Cavaliers are praying they get to see them on basketballs greatest stage again. The playoffs are right around the corner and the Cleveland Cavaliers are primed and ready to attend to that unfinished business. 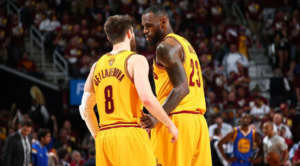