After the game, Warriors forward Draymond Green took a shot at the Indians on Twitter. 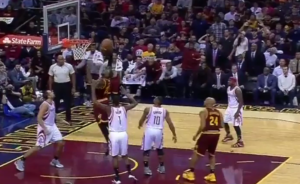 JUST IN: Video: LeBron James get saround two Rockets and throws it down
Related TopicsCavaliersCubsIndiansWarriors