The Cleveland Cavaliers championship victory has brought on a lot of attention to the city of Cleveland.

The President of the United States, a huge basketball fan (and especially of the Chicago Bulls) tweeted his congratulations to the Cavs right after the epic Game 7 win against the Warriors.

love em all, but as a bulls fan got to go with mj. in baton rouge, just met lsu freshman ben simmons – will be great https://t.co/Du1gflVYp4

This victory however, is of much more significance than anything else. The Cavs winning a championship was the greatest thing to happen to this city, and one tweet simply isn’t enough to congratulate a team with so much pressure on it’s shoulders. So after the championship parade, President Obama personally called coach Tyronn Lue for a congratulatory chat on Thursday. 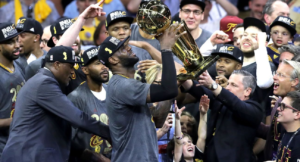 JUST IN: How The Cavs Ended Up With No Picks In The 2016 NBA Draft
Related TopicsBarack ObamaCleveland CavaliersTyronn Lue