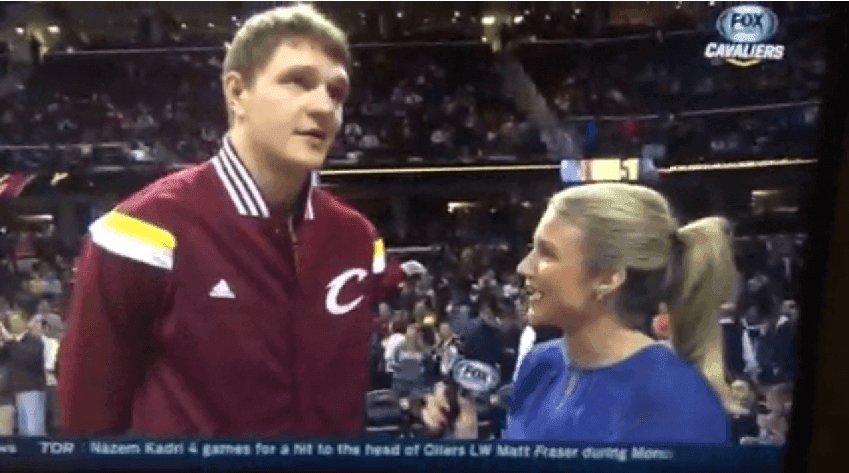 The Big Russian, Mozzy, the Wizard of Moz, the Maserati; all nicknames for Cavs’ center Timofey Mozgov. None truer than the Big Russian after Wednesday night, however.

During a pregame interview with Cavs sideline reporter Allie Clifton, Mozgov was asked about how good it felt to be back home after spending 20 of the last 25 days on the road. Here’s what he responded with:

Did you get that? Yeah, neither did we, but we can assume Mozzy spoke highly of playing in the atmosphere of Quicken Loans Arena and the fans.

Clifton simply nodded and smiled through Mozgov’s answer as if she knew exactly what he was saying..

“Nothing better than the best fans in the NBA,” she said.

It seemed like a normal response for Mozgov, until he was asked a second question by Clifton. He began answering it, but then realized his mistake:

“We just have to be working and…oh, what?” Mozgov said, laughing.

The big man covered his face with his hands, seemingly embarrassed at how he could be so oblivious to the fact that he spoke the wrong language. After a slight blush, he finished the interview. Both Clifton and Mozgov handled the semi-awkward situation really well, and this will definitely be going down as one of the season’s top bloopers.

Clifton was already joking about it during the game!