VIDEO: Paul Millsap Reveals Why Hawks Were Not Prepared For Cavs This Postseason The Atlanta Hawks were supposed to be better prepared for the Cavs this time around. After being swept in the 2015 Eastern Conference Finals, the Cavs were expected to get a much tougher Atlanta Hawks team who had figured parts of them out.

Or so we thought.

The Cavs made quick work of the 48-win Hawks, eliminating them from playoff contention and completing a four-game sweep on Sunday thanks to some incredible sharpshooting and ball movement. The Cavs made an average of 19 three-pointers during the four game series, which included a record-setting 25 in Game 2.

Last year’s Cavs team was shorthanded, without Kevin Love for the entire series and without Kyrie Irving for most of the series. Those games were grind it out games as the Cavs did all the dirty work and made all the right passes. It wasn’t always three-pointers; there were lobs, dunks, mid-range shots, iso-heavy plays that saw LeBron kick out to shooters.

This postseason was different, and Paul Millsap and the Hawks had no idea this was coming or how to stop it. Millsap spoke on the gameplan the Hawks thought they were going to use until Cleveland started draining threes from everywhere. 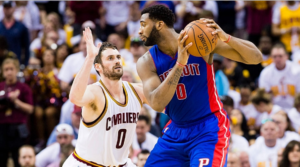