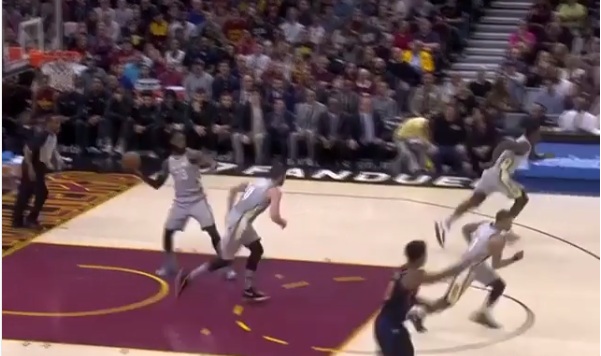 LeBron James has been putting up mind-bending performances on an almost nightly basis this season to the point at which basketball fans have gotten so used to it, they are taking The King for granted. In other words, James has somehow made at least a few people tired of his dominance. That said, the Cleveland Cavaliers superstar does not seem to be anywhere close to stopping churning out incredible numbers and highlights.

On Friday night, he added some more, as he put up 27 points, nine assists, six rebounds, and three steals with a pair of three-pointers during the Cavs’ 120-95 decimation of the Phoenix Suns at home. And oh, by the way, James also made this insane touchdown pass off a one-handed rebound to streaking Jose Calderon on the other end of the court.

Was James also trying out for the Cleveland Browns’ starting quarterback job? The Browns traded for Tyrod Taylor and are expected to spend one of their two top-five picks in the 2018 NFL Draft on a signal-caller, but James probably could be an option, too.

Kidding aside, LeBron James is in the middle of a monumental season that may not end up with an MVP trophy because of one other James who is playing for the Houston Rockets, but that should not diminish his greatness in this campaign. So far, James is averaging 27.4 points, 9.1 rebounds, and 8.6 assists per game. This month, he is close to slashing a triple-double average with 31.0 points, 9.8 rebounds, and 9.8 assists.

James and the Cavs will look to stretch their win streak to five games this Sunday on the road against the Brooklyn Nets.