There’s no easy way to put it. The Cavs put up a shocking and embarrassing performance in Game 2, possibly one of the worst games in my recent NBA Finals memory.

LeBron James finished with 19 points, eight rebounds, nine assists, and four steals, but also shot just 7-17 from the field and added seven very costly turnovers. After the game, James spoke with the media, and expressed his emotions as well as what the Cavs have to do to defeat the Warriors in the very critical Game 3. 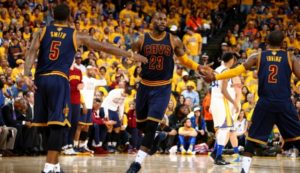