Kyrie Irving is a master of finishing at the rim. He’s got aggressive finishes over defenders as well as acrobatic and wild layups around defenders that always seem to mesmerize the crowd.

In Saturday’s practice, Irving showed off his cool ball control while shooting. Irving can go to both the right and the left hand with equal chance to finish at the basket. Here, Irving displayed his layup attempts with two basketballs at the same time, showing a little bit of his versatility around the basket.

Hopefully Kyrie can shoot better in Game 2 than he did in Game 1, where he went 7-22 from the field for 26 points. 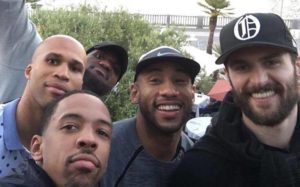