VIDEO: Kyle Korver Reacts To J.R. Smith 3-Point Barrage, Hails Smith As One Of The Most Underrated Shooters Ever 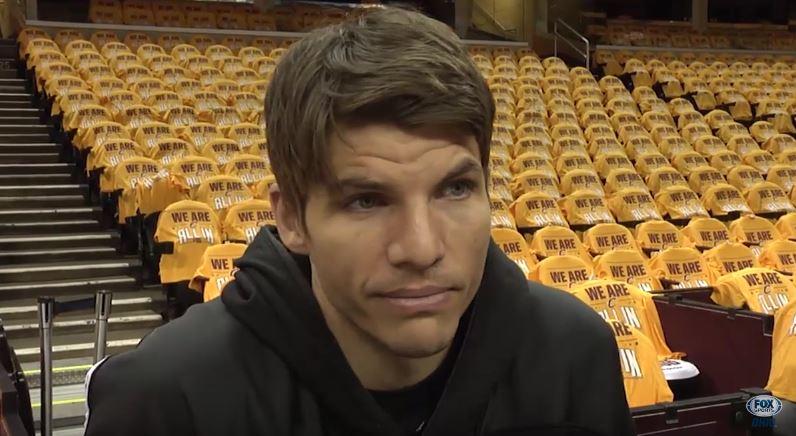 While the Cleveland Cavaliers have owned the Atlanta Hawks in all of their past nine matchups, J.R. Smith has also held his own when pitted against one of the deadliest shooters in the game today in Kyle Korver.

In Game 1 of their East Semis showdown, Smith played an essential part in limiting Korver to only one shot in 37 minutes of action – second most among all Hawk players. His activity and boundless energy in chasing down the slippery Atlanta guard not only denied shots to Korver, but also eliminated a large cog in the Hawks’ offensive scheme.

Prior to Game 2, which the Cavs won by a large margin thanks to Smith’s uncanny shooting, Korver revealed in this FOX Sports Ohio video the high regard that he holds for the Cavaliers shooter.

While Korver is known for his ability to pick his spots on the floor, Smith has had the reputation of being one to throw two or three ill-advised heaves in a game. This may have helped in earning his “underrated” mark over the years, but the situation in Cleveland proved to be a perfect fit for Smith and he is now displaying a more mature and controlled demeanor on the floor.

“I’ve never seen a team shoot that well in one game,” Kyle Korver said. “That was pretty amazing. If they shoot the ball like that, I don’t know if anyone can beat them, to be honest.”

In the all-time three pointers made leaderboard, Kyle Korver is at 8th place with 1,887 conversions, while J.R. Smith is ranked 17th with a total of 1,679. Their next two meetings will be in Games 3 and 4 in Atlanta.