Cleveland power forward Kevin Love is a lot of things. He’s graceful, sturdy, versatile, and disgusting. Speaking of which, Love is also disgusting in a lot of ways. Outscoring Paul George and out-rebounding DeMarcus Cousins is disgusting, but the nastiest instance of Kevin Love happened during Wednesday Night’s dismantling of the New York Knicks.

look mom, I can blow my nose without using a tissue! pic.twitter.com/wP1ZpJjfDV

Joining his Big Three in a 21-point effort, the trio outscored the entire Knicks team in three quarters, giving Kevin Love the entire fourth quarter to clear his sinuses. 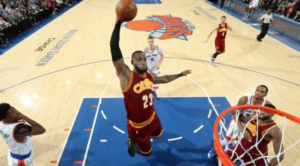