In the Cavs and Bulls preseason game on Friday night, Jordan McRae received a full court pass and had a wide open lay up. Instead, he wanted to assist one of the teammates beside him. One of them was Kay Felder, and McRae threw up an awkward alley oop pass right next to Felder.

Unfortunately, he should’ve just made the layup because Felder was not expecting the pass, botched the layup, and Chicago recovered the ball. It looks like we already have a nominee for worst alley oop on Shaqtin’ A Fool. 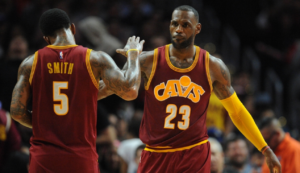 JUST IN: LeBron James, Tristan Thompson react to finally having J.R. Smith back on the team
Related TopicsCavaliersJordan McRaeKay Felder