After evening out a three-point deficit at the half of Friday’s game against the Toronto Raptors, the physicality picked up along with the stakes, as LeBron James and Jonas Valanciunas battled for possession of the ball early in the third quarter.

Tristan Thompson helped close out the left side of the lane as Cory Joseph missed a layup and grabbed the rebounds, as James boxed out the 7-footer only to get tangled up with him and get thrown out of bounds as the big man backpedaled his way back on defense.

Jonas Valanciunas gets boxed out by LeBron James, and then throws him to the ground right after #Cavs #Raptors pic.twitter.com/NhBsGS5XPO

Valanciunas wasn’t whistled for the original over-the-back foul, but was for wrestling James to the ground right after, doing so in front of referee Bill Kennedy.

The Raptors are forced to resort to as much physicality as it’s allowed to prevent another monster performance from the King, who has torched Toronto to the tune of 37 points per game in the first two games of the series. Before the start of Game 3, Raptors coach Dwane Casey said he wanted his team to get physical, even if it takes a possible dirty shot here or there in a boxing reference.

James has been unfazed so far, having yet another consistent night from the field and getting to the foul line with ease — reaching double-digit attempts for the second straight game. 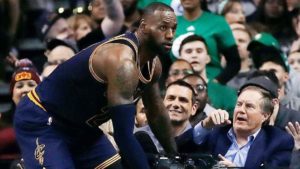 JUST IN: Chauncey Billups doesn’t like LeBron James spinning the ball in front of a defender
Related TopicsCavaliersJonas ValanciunasLeBron JamesRaptors