VIDEO: J.R. Smith Hits Tough Trick Shot After Whistle, Then Takes A Bow For The Crowd The Cleveland Cavaliers dismantled the Washington Wizards on Friday night, and everything was going their way from the opening tip. The Cavs ended up shooting 46.7% from the field, including 44.4% from downtown in a game that saw the Cavs move the ball like we’ve all been wishing for.

On one play, Kyrie Irving drove to the basket, drew a foul, and kicked the ball out To J.R. Smith. Smith proceeded to catch the shot with on hand then just pulled up for fun as the play was already dead. He ended up banking the shot with the entire crowd cheering when the shot went down. Smith just gave the fans a kind bow, before proceeding to help the Cavs to a 108-83 victory.

J.R. hits the tough shot and takes a bow. pic.twitter.com/NnUTJ2yseE

Hopefully the Cavs can continue moving the ball this well as they face off against the Boston Celtics. 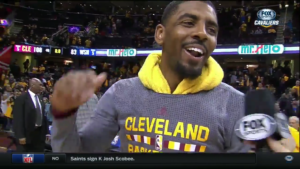