In Game 1 of the Eastern Conference Finals, the Cleveland Cavaliers took care of the Toronto Raptors by the end of the third quarter. With the lane open,the Cavs took advantage, hitting 26 shots within 10 feet of the basket.

RELATED: Forget Making It Rain, Take It Right Down The Lane

The Raptors, however, tried to step up the physicality with a bevy of hard fouls midway through the game, when the Cavs and their fans were roaring past the competition.

James got whacked above the shoulders and across the chest multiple times, and Tristan Thompson did as well, but none of those were called flagrant fouls.

ESPN’s Dave McMenamin reported on James being clueless as to how he would get the benefit of those calls.

RELATED: LeBron James Has No Idea What Warrants A Flagrant Foul Against His Defenders

After hearing those comments, DeMarre Carroll took his own jab at James for acting. 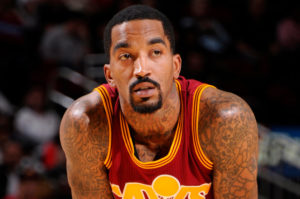