While the topic has been dead to some, the never ending comparison between LeBron James and Michael Jordan found more fuel to its relevance with the Cleveland Cavaliers’ most recent championship conquest.

RELATED: Lebron Gives Back To Families

After winning his third title at the age of 31, James took another step closer to Jordan’s ring count, the one area where he has gotten the most knock on his claim to the center of the basketball universe.

In an episode of The Herd, Colin Cowherd discussed all that remains in the separation between these two basketball demigods.

In terms of accolades and the wins discussion, Michael Jordan easily trumps LeBron James. Five and six beats four and three (Most Valuable Player and championship count). But that’s just skindeep. The transcendence of their impact also make up a large part of their greatness.

RELATED: By Possibly Leaving Money On The Table, LeBron James May Set Himself Up for Historical Contract

However, the age factor heavily favors Cleveland’s savior. Being only 31 years old, he still has five or six good years ahead of him. Will that be enough to catch Michael Jordan? Let’s sit back, enjoy the ride, and become witnesses. 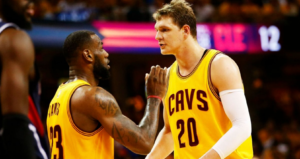