VIDEO: Bruce Bowen-Led Panel Debates If LeBron James Is The Best Player In The World

Bruce Bowen, Sunny Hostin, and Julie Fowdy comprised the three-person panel at Good Morning America recently. They took on one of hottest conversation pieces over the past couple of years and that is the question of whether LeBron James is the best player in the world or not.

If this topic was tackled a couple of months ago, the answers would have been different with Stephen Curry putting on a show, but James’ recent performance in the NBA Finals, where it mattered the most, served as a strong reminder to everyone who’s the true alpha in the league.

Is LeBron James the best player in the world? @Bowen12, @sunny and @JulieFoudy debate. #NBAFinals https://t.co/ihKd3CpaOQ

Two out of three isn’t bad, especially when those two votes came from ESPN persons. But the argument of having Kyrie Irving on the team denies James the “best player in the world” tag is quite a weak one.

The four-time MVP outplayed the reigning back-to-back MVP by a mile. While Curry was turning the ball over more often than making dishes (sorry “Chef”), James was lording it over all major statistical categories (points, rebounds, assists, steals, blocks) which was unprecedented. He did this against stats monsters Draymond Green and Curry himself.

It’s hardly debatable at this point. People can criticize every little thing that LeBron James does in the regular season, but when he decides to turn it on, no one can stop him. 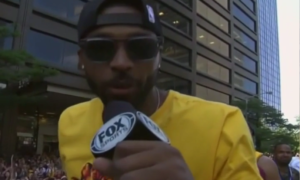