The NBA revealed it’s “Last Two-Minute Report” from last night’s Cavs-Pistons Game 4, which stated and confirmed that Kyrie Irving did not foul Reggie Jackson on his final shot attempt of the game.

At 1.5 seconds: Irving maintains legal guarding position and makes no contact with Jackson as he initially reaches in for the steal. Jackson then initiates contact with Irving as he jumps sideways on his shot attempt.

Jackson went off in his postgame interview after the game. Vince Ellis of the Detroit Free Press reports on Jackson’s comments.

“I just think the refs need to have some type of system in mind for necessarily about fines, suspensions, being fired, the same thing that happens to us,” Jackson said. “Make bad plays, questionable, you’re really productive to the sport. I think they should have consequences like the players.”

Stan Van Gundy refused to comment on the play, however. He’s been extremely careful in what he says since the league fined him $25,000 for saying that LeBron can do whatever he wants on the court in Game 1. 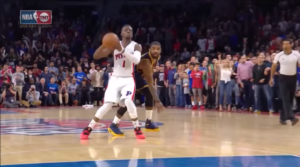