How Versatile is the Cavaliers Defense? 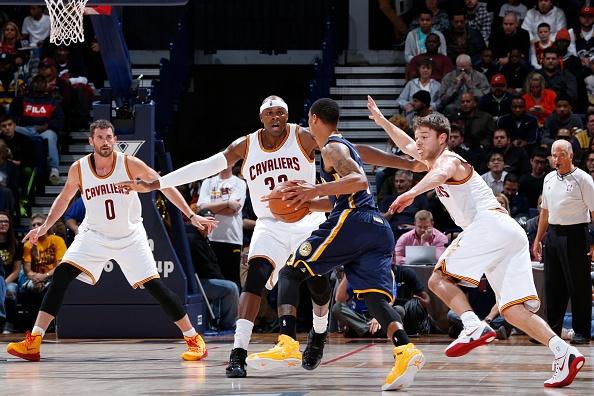 LeBron James and the Cavaliers have had their hands full so far this season, going up against the likes of Joakim Noah, LaMarcus Aldridge, Anthony Davis, and Nikola Vucevic, to name a few. These players are all bigs who thrive on both sides of the floor: grabbing rebounds, setting picks, and throwing down rim-shaking dunks that pump up the arena.

It is was obvious at the start of the 2014-2015 season that the Cavs would have trouble rim-protecting and defending bigs, but how big of a problem is it now, games into the regular season?

When the Cavs played the Washington Wizards in November, they held the Wizard’s bigs (Kris Humphries, Marcin Gortat, Drew Gooden, Kevin Seraphin) to 24 points, 11 rebounds, and five assists. What is notable is that the Wizards only managed to grab 26 rebounds on the game; but this game represented the Cavs’ progression and regression. Although they were able to lock down the bigs, the defense on the wings didn’t hold, as Rasual Butler came off the bench to lead the Wizards with 23 points. In the past few games, there was an emphasis on packing the paint, which has opened up the wings for shooters. 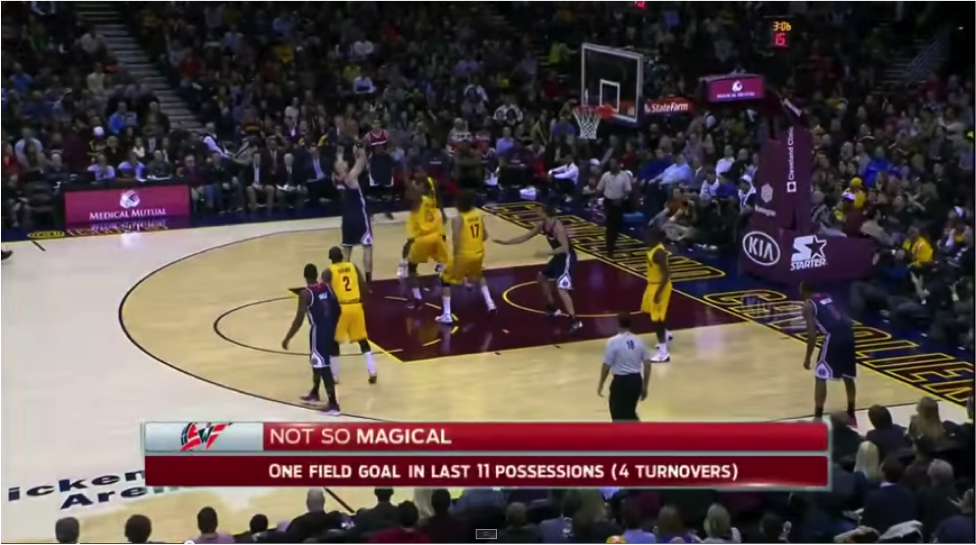 This shot is from the first quarter of the Cavs-Wizards game. Gortat has the ball at the left elbow, defended by Tristan Thompson. Anderson Varejao is guarding his man in the paint, and he steps in to help D. As a result, Kyrie Irving, LeBron, and Dion Waiters all step away from their man to cave into the paint. This creates an illusion of crowding, which makes Gortat feel heavily guarded. Although Gortat ended taking the shot, he could have easily passed to Bradley Beal, Otto Porter, or Martell Webster on the wing for a non-contested three-pointer.

Another area where the Cavs need work is on pick and roll defense. The Cav’s bigs are often caught on their heels, as their man easily rolls to the basket for an easy layup, shown below against the Denver Nuggets:

In this sequence, two problems are apparent. Waiters, who is guarding Ty Lawson, gets bumped by a Timofey Mozgov screen. Instead of fighting through the screen, Waiters ends up on his heels, so he is only able to reach for the ball, resulting in essentially no defense. Varejao pops up on the other side of the screen to provide help, but this split-second of help gives Mozgov an open lane to receive the alley-oop pass from Lawson. Kyrie pops into the paint, but hesitates to give help, which allows Mozgov the easy dunk. Ideally, the Cavs should become comfortable enough with eachother that Kyrie will cave in to help Varejao, and Waiters will pop over to guard Arron Afflalo in case Mozgov decides to kick the ball out to the wing.

Another representation of the Cavs trouble with bigs was evident during their win over the East-leading Toronto Raptors on Friday night. Amir Johnson of the Raptors managed to shoot 11-15 from the field, and make his only three-point attempt on the way to a 27 point, seven rebound, four assist night. On the other hand, the Cavs out-rebounded the Raptors 48-40, and shot better (48% vs. 40%). 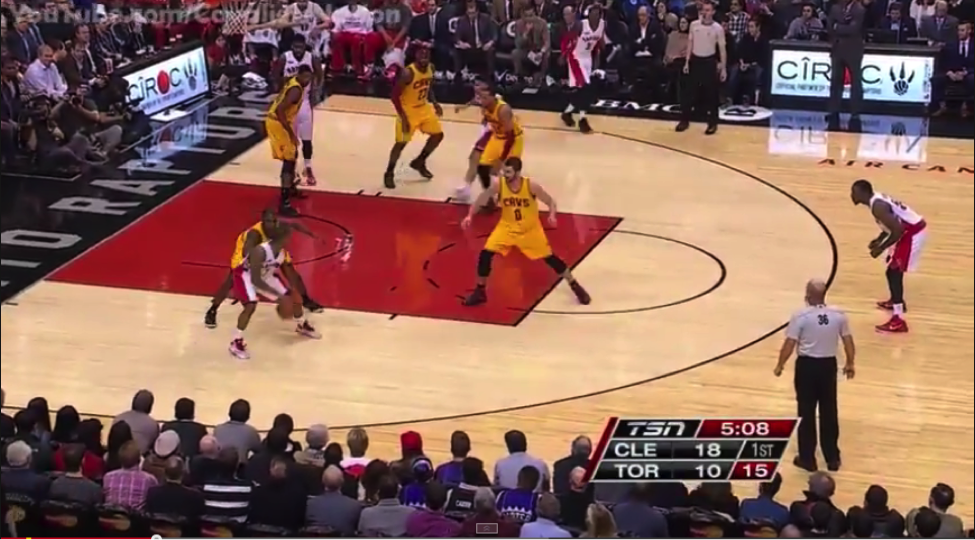 The Cavs came out of the gate playing smart basketball on both ends of the floor. This shot is from the first quarter of the game, and Kyle Lowry is posting up on Dion Waiters. Lowry’s call for isolation works in the Cav’s favor, as Lowry is a few inches shorter than Waiters. James, Love, Marion, and Thompson all pack the paint to help, while also staying close to their man. But in this exact sequence, Lowry can only realistically make a pass to Johnson at the top of the key, since Thompson is in the paint to prevent back-door passes. This really displays the improvements on defense the Cavs have shown during their six game win streak.

Additionally, Tristan Thompson had a career game, going off for 21 points, 14 rebounds, and two assists, ending the night with a +/- of +20, a team high. Thompson has become known for his ability to get offensive rebounds, and this was evident against the Raptors as he pulled down 9 OREB. As for the wings, the Cavs did very well contesting shots. This kept any single wing player from making a big impact on the game. The Cavs play the Raptors again on Tuesday at the Q, so it will be interesting to see if they can repeat this dominant performance.

Overall, Blatt needs continue to build on their defense, which emphasizes on help defense and rotations to minimize the need to run around the court on defense. The Cavs have so many athletic players that everyone is versatile enough to guard anyone on the opposing team. It will be interesting to see if the Cavs are able to continue their paint dominance against opposing bigs, and extend their win streak to seven against Brooklyn on Monday night.