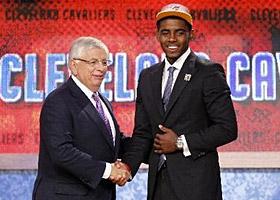 The Wine and Gold (1-3) played their second game of their first west coast road trip Wednesday night against the Utah Jazz (1-2). Fresh off a 19-point loss at the hands of the Portland Trailblazers one night prior, the Cavs came into Wednesday’s contest looking to rebound from their first big loss in a big way. No Cavalier was more determined to atone for their performance against the Trailblazers than LeBron James and the reigning MVP did just that. One night after finishing with only 11 points against the Trailblazers the King rebounded nicely with 34 pts including the last six points of the game for the Cavaliers. In the end the hot shooting of Gordon Hayward and the Utah Jazz proved just potent enough to send the Cavaliers to their first back-to-back loss of the 2014/15 campaign. 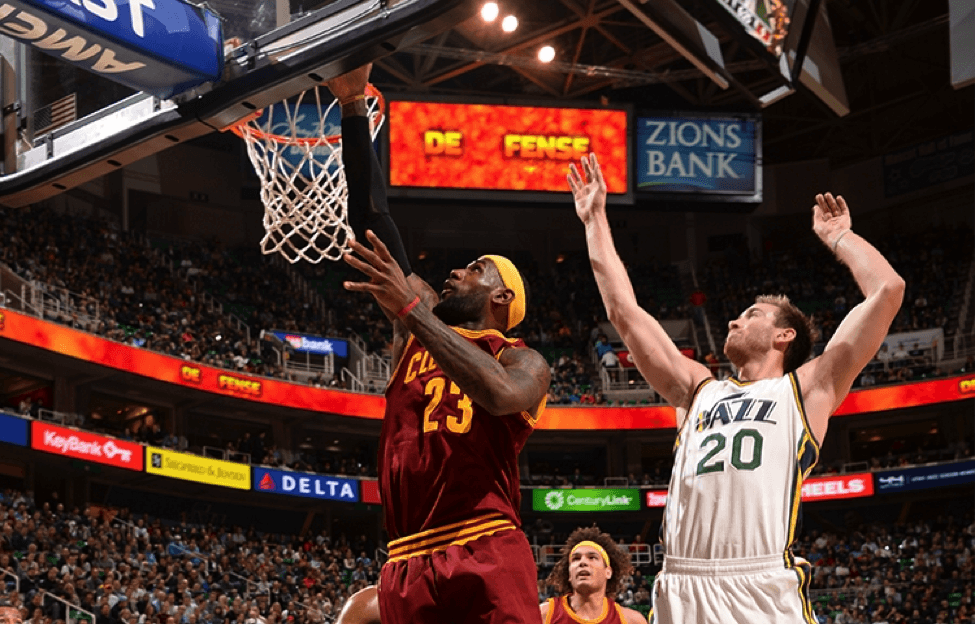 When Jazz guard Gordon Hayward received a max contract this summer many in the sports world questioned if could truly live up to such an immense deal. So far this season he has earned every penny and Wednesday night he truly showed up big. Hayward stuffed the stat sheet against the Wine and Gold with 21 pts, 7ast, 4 reb and a big block on LeBron James. No shot was more important than the one he took with no time left in regulation to give his team their second win of this young season. The big men that had notable performances for the Jazz were Enes Kanter (18 pts & reb), Derrick Favors (21 pts, 10 reb & 2 blks), and Rudy Gobert (7 pts, 4 reb & 3 blks). All three big men did a good job of finding open teammates and getting high percentage shots for themselves throughout the game. As a team the Jazz dominated the Cavs on the boards (41-30), with regards to assists (26-6) and in blocks (8-4).

The Wine and Gold were led exclusively by their big 3 which scored a combined 79 of the team’s 100 points. Perhaps the most lopsided statistics for the Cavs were LeBron James and Kyrie Irving combining for four assists (Kyrie had zero) and five turnovers, meaning the majority of the game the Cavaliers played one-on-one against the Jazz. The Wine and Gold will need to develop some team chemistry and in a hurry as many teams will look to replicate Utah’s performance in the coming games.

“I’ve had two games where I’ve kind of got a little passive and been more of a setup guy and, as a result, we had two losses. In the game where I’ve been aggressive, we’ve won. Is winning the ultimate thing or us being the best team we can be? It’s something that’s going in my mind right now that I’m trying to figure out.”
– LeBron James in pregame interview 11/6/14

First Half
Playing in their first game this season without the services of guard Matthew Dellavedova (knee) the Cavaliers started off the contest hitting over half their shots as there was little defense played in the initial quarter. Towards the end of the first quarter the Jazz got a few great shots in the paint and started to tighten up defensively on the Cavs and built up a twelve point lead. The Cavaliers were able to cut down that lead to nine points after Kyrie Irving hit a three-pointer at the buzzer to end the quarter.
Here’s Kyrie’s buzzer beater at the end of the first quarter:
The second quarter brought much of the same fluid ball movement and effective points in the paint by the Jazz that put the Cavs into a hole in the first. Towards the end of the quarter both teams traded 7-0 runs and soon after Shawn Marion stole the ball from Derrick Favors and passed it ahead for LeBron to score on the break and get to the free throw for one more point. Marion’s Defense leading to LeBron’s And-1:
The Cavs would finish the quarter strong by forcing two missed shots by the Jazz but would trail 59-48 after two quarters. At half LeBron James and Kyrie Irving each had 15 points on 9 shots, while only two members of the bench had even attempted a shot. On the other hand the Jazz were led at half by Gordon Hayward who had 15 points and 4 assists. Throughout the first two quarters the

Second Half
The Cavaliers came out in the third quarter visibly more energetic on offense and dedicated to defending Utah’s big men. Despite their efforts it was an up and down quarter, with the down being the Jazz increasing their lead to 16 points midway through the third after a wide open three by Trey Burke. Through better shot selection and more teamwork defensively the Cavs managed to cut down Utah’s lead by the end of the quarter to just one point at 76-75.
Marion’s Block in the 3rd quarter:

Despite being down by double digits for most of the game the Cavaliers had given themselves a realistic chance to win after a tough third quarter where they outscored the Jazz 27-17. After being down to the Jazz since the opening minutes of the game the Cavaliers finally took their first lead late in the fourth quarter thanks to their fearlessness to get into the paint. The tide seemed to turn when Kyrie Irving scored 10 points in a much-needed 14-6 run that gave the Cavaliers an 89-86 edge with 4:43 remaining. The two teams traded leads from then on and things got a little heated when Jazz forward Trevor Booker was whistled for a flagrant- foul after hitting Kevin Love in the head on a shot attempt in the paint. The two exchanged words and received technical fouls, adding more intensity and drama to the contest in the process. With the Cavs down 100-96 with 17 seconds remaining, James hit a corner three-pointer off a deflected pass while falling out of bounds. He then dribbled into a three-pointer on the other end and was fouled by Derrick favors, thus earning a trip to the free throw line for three shots. LeBron calmly made all three shot to the game at 100. With three seconds left in the game the Jazz got one last shot to win in regulation, and they did just that. Hayward buried a deep two-pointer from the right wing after getting free of LeBron James thanks to a well-placed pick by Derrick Favors.

The Cavs were led by LeBron James (31 pts, 4ast & 3 reb), Kyrie Irving (34 pts & 2 stls) and Kevin Love (14 pts & 8 reb). They also got vital contributions from Anderson Varejao (8 pts, 9 reb & 1 blk) and Tristan Thompson (8 pts & 5 reb). Dion Waiters and Mike Miller were the only other players to play off the bench yet were not factors in the game.
While their starting point guard literally had zero assists in 45 minutes of action (for just the second time in his career) and much of the night appeared to consist of 1-on-5 basketball the Cavaliers sheer talent gave them a chance to win the game until the final second. Clearly the outcome was much closer than the drumming that took place at Portland but the Cavaliers certainly have to work on cohesiveness and ball movement as the elite teams in the NBA will surely not be beaten by individual talent. They will have an opportunity to right the ship after two consecutive losses.