After Game 1 loss, Tyronn Lue says Warriors are ‘the best i’ve ever seen’

Last night, the defending champion Cleveland Cavaliers squared off against the Golden State Warriors for Game 1 of the NBA Finals. When the smoke cleared inside Oracle Arena, the Warriors had taken the first battle by way of a 113-91 victory, marking the first time this postseason that Cleveland scored under 100 points.

There were several takeaways from last night’s game, including Cleveland’s 20 turnovers (Golden State had just four), lack of bench production (Kyrie Irving and LeBron James scored 73 of Cleveland’s 91 points), and points allowed in the paint (56). Obviously, Cavs head coach Tyronn Lue will have his team in the film room ahead of Game 2 (Sunday at 8:00 p.m. on ABC).

During his post-game media availability, coach Lue had high praise for the Warriors, calling them the best he has ever seen.

“They’re the best I’ve ever seen,” coach Lue said. “I mean, no other team has done this, right? 13-and-0 and they constantly break records every year. You know, last year being 73-and-9, this year starting the playoffs undefeated. So, they’re playing good basketball, but we can play better.”

Ty Lue with some high praise for Golden State: "They're the best I've ever seen."#CavsWarriors #NBAFinals pic.twitter.com/1YOoPdv3h6

As coach Lue says, the Cavs will indeed need to be better if they plan on defending the Larry O’Brien trophy. We’ll just have to wait and see how the champs respond to this adversity. 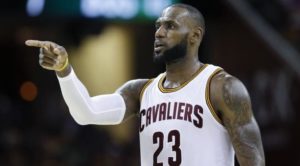 JUST IN: Jason Whitlock says ‘real racism’ is not a problem for LeBron James as he doesn’t deal with it
Related TopicsCavaliersTyronn LueWarriors