Sanders, 28, holds career averages of 6.5 points, 5.8 rebounds, and 1.8 blocks through 233 games. The former 15th overall pick in the 2010 NBA Draft met with Cavs head coach Tyronn Lue and other members of the coaching staff for an evaluation. Jason Lloyd of The Akron Beacon Journal has Coach Lue’s thoughts on Sanders in his recent article.

“He’s a good dude,” Lue said of Sanders. “I know he has some negative things said about him, but just meeting him for the first time, just talking to him one on one, he’s a great guy. You never know, you never understand until you’re around that person and you’re able to talk to that person.”

“With me, everybody I meet always has a clean slate. You have a clean slate until you do something wrong, so he was a great dude just talking to him.”

The 6-foot-11 big man played in 50 games for the Bucks after signing a four-year, $44 million deal with the team before the 2013-14 season. He was then waived in February of 2015 after a bout with depression and anxiety. As many of you know, Sanders was suspended for five games due to a positive marijuana test — a drug he reportedly used to treat his medical ailments.

Sanders’ best season was the 2012-13 campaign, when he averaged 9.8 points, 9.5 rebounds, and 2.8 blocks per game. So, does he still have what it takes to play at the highest level? Has he lost a step? Coach Lue seems to think the talent is still there.

“I just think it’s his mindset. I don’t think his talents went anywhere. Being able to block shots, run the floor, being athletic. I don’t think that’s going to change,” Lue said after today’s workout. “It’s just a mindset of, ‘Does he really want to play the game and does he still love it?’ If his mindset is right, he can definitely still play.”

Will the Cavs pull the trigger on Sanders? While it’s true that the trade deadline is tomorrow, the champs could still make a move for the coveted rim protector in the post-deadline market. 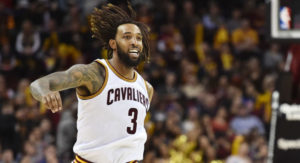