Tyronn Lue stayed out of Cavs’ GM situation due to bonds with David Griffin, Chauncey Billups 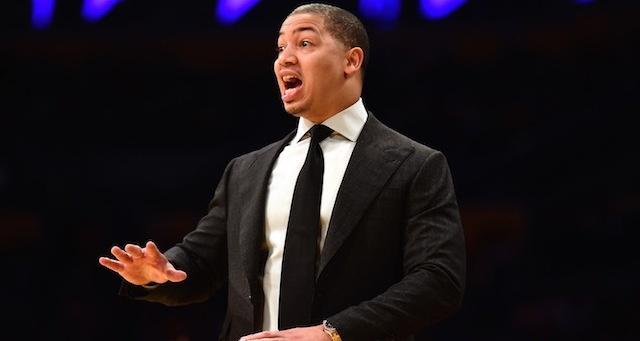 When former Cleveland Cavaliers general manager David Griffin and team owner Dan Gilbert mutually decided to part ways shortly after the 2016-17 season, head coach Tyronn Lue lost the one man who gave him a shot at coaching in the NBA. Shortly after Griffin’s withdrawal, Gilbert and the Cavs poured all of their focus on former Detroit Pistons great Chauncey Billups, who is said to be one of coach Lue’s best friends.

Several face-to-face meetings and one counter-offer later, Billups decided to step away from Gilbert’s reported $2 million offer to serve as president of basketball operations for Cleveland. Now, in a bit of an odd twist, coach Lue won’t be working with either of his friends. Instead, it appears that acting GM Koby Altman could be the man taking the reigns for the Cavs.

Coach Lue is a fairly straight talker, so when he was asked how all of this front office drama is affecting his summer, the former University of Nebraska Cornhusker and Mexico, Missouri native gave a blunt reply.

“You know how it affects me, he gave me my job,” Lue said about the departure Griffin.

Coach Lue, who was sat on the sidelines watching his team participate in last night’s NBA Summer League opener, didn’t have much to say about the Griffin situation, but he did mention that he and Billups had spoken about the job opportunity. Lue says he tried to stay out of the negotiations for the most part.

“I talked to (Chauncey) about the situation,” Lue said. “Any time you get the chance to advance, be the president and GM, it’s always something great. I know it’s something he always wanted to do. But I just kind of stayed out of the situation because I was so close to Griff, so close to Chauncey, so I didn’t want anything to do with it.”

In closing, coach Lue, who is vacationing in Las Vegas, said he is still not over losing to the Golden State Warriors in last year’s NBA Finals. However, he also wanted to remind everyone that the Cavs are still a great team.

“We still have a great team and just got to sit back and wait and see what happens,” coach Lue said. “October comes, we’ll be ready to play.”