Thinking about the long-term health of his team’s stars, Cavs coach Tyronn Lue opted to rest LeBron James, Kevin Love and Kyrie Irving in Cleveland’s 108-78 loss to the L.A. Clippers on Saturday. Deciding to rest key players is nothing new, but there was one problem in this instance. Cleveland was playing L.A. on national television and the NBA dubbed the contest one of their marquee matchups of the week.

Naturally, the NBA was upset with the Cavs for robbing a national television audience of watching a competitive game between two of the better teams in the league. The league even reached out to Cavs General Manager David Griffin to express their remorse with Cleveland’s decision. And while the NBA’s reaction has some merit, according to Lue, the whole thing is, well, stupid.

But Lue was not happy with the league’s reaction.

“No, I didn’t. But, I mean, it’s stupid,” Lue said Sunday before the Cavs took on the LA Lakers at Staples Center. “Kyrie didn’t come back the game before, knee soreness, Kevin just had his first game back, we needed two days in between each game. It’s OK, though, whatever. It’s stupid.”

Lue’s reaction is perfect, especially the “whatever” part. Because that is basically what the NBA’s reaction is. It’s just whatever.

In addition, the NBA didn’t fine the Cavs, they just made a stern phone call. Plus the Cavs had a reason to rest their stars, James is near the top of the league in minutes played and both Irving and Love were slightly banged up. The timing was unfortunate though but with the grinding nature of the NBA’s 82 game schedule is largely to blame.

Teams resting their stars will continue to be a hot-button issue in the NBA until the league makes drastic changes to the schedule. Those type of changes likely won’t be easily doable so the debate will just continue to go on for the foreseeable future. 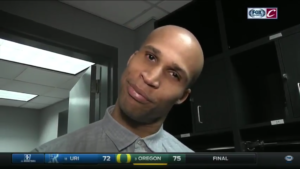