The Cleveland Cavaliers got embarrassed tonight in Milwaukee against the Bucks, falling 101-118 and lacking effort for most of the game.

With 3:48 left in the third quarter and the Cavs down 67-78, coach Tyronn Lue decided he had seen enough and yanked all five starters from the game. After giving little effort as the Bucks went on a 13-2 run to take a 78-67 lead through the third, Lue made the move that surprised fans and players alike. Out went Kyrie Irving, J.R. Smith, LeBron James, Kevin Love, and Tristan Thompson; in came Jordan McRae, DeAndre Liggins, Mike Dunleavy, James Jones, and Chris Andersen.

Ty Lue clearly sending a message to his starters for their absolutely poor performance.

Unfortunately, the move didn’t bring positive, on-court results as Milwaukee increased the lead to 18 points going into the fourth quarter. The move, however, was clearly meant as a message to his starters to play better after seeing no effort against the clearly hungry Milwaukee Bucks team.

The Cavs ended up losing 101-118, and the Cavs’ starters got to rest down the stretch. Cleveland gets to redeem themselves on Thursday night against the L.A. Clippers. 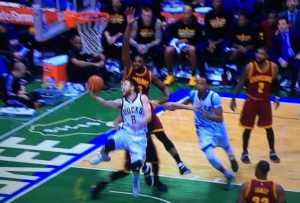