Tyronn Lue on preparing for the Raptors

Over the past couple of days, Cleveland Cavaliers head coach Tyronn Lue has been preparing his players for their second-round matchup in this year’s NBA Playoffs. Game 1 between the Cavs and Toronto Raptors will tip off on Monday at 7 p.m. EST inside Quicken Loans Arena.

After yesterday’s practice session at Cleveland Clinic Courts, coach Lue was asked what sort of things he is concerned with in facing the Raptors. Right away, Coach Lue pointed out Toronto’s “two-headed monster.” Most NBA fans will know exactly who he was referring to.

“The two-headed monster,” Lue said with a stern look on his face. “Kyle Lowry and DeMar DeRozan — they’ve been great the last three or four years with just putting that team on their shoulders and carrying them. So, we know — offensively, those two guys can do a great job carrying their team. We gotta do some different things, give them different looks. And we have to do it by committee. It’s not gonna be a one-on-one challenge, where one person is gonna guard a guy. We have to make it tough for them.”

Coach Lue is right. Lowry and DeRozan have indeed been great for the Raptors. When asked why he thinks DeRozan is such a tough cover, the second-year head coach gave an honest and respectful reply.

“He’s one of the best one-on-one players in our league right now,” Lue said of DeRozan. “He does a good job of getting to the free-throw line. His mid-range jumper is automatic and he can get to the basket, where he’s very athletic. So, he’s a tough cover. We just wanna make him make field goals and not free-throws — make it hard on him.”

As most basketball fans know, the Cavs and Raptors met in last season’s Eastern Conference Finals. When asked if he could run some of the same plays or schemes from last season, coach Lue paused for a moment, sent a blank stare in the reporter’s direction, and said he’s “just happy to be here.”

The Raptors acquired Serge Ibaka from the Orlando Magic in February. When asked if he thinks Ibaka makes the Raptors a different team, coach Lue conceded that he does.

“Yea, he does,” coach Lue said. “You get a guy who’s a premier shot-blocker, a great defender, a great one-on-one defender. And also, he can make a shot. You know, he can make a three-point shot now. His mid-range game is very nice also. He adds a different dimension to their team. I know they (the Raptors) were talking about wanting to get better defensively, so adding Ibaka and P.J. Tucker really helps that for them.”

When asked how having Ibaka as a member of the Raptors helps DeRozan and Lowry offensively, Coach Lue says he gives the duo someone to throw the ball back to who can make a shot.

“Well, they’ll have someone who they can throw it back to who can make a shot,” Lue said of Ibaka. “I know Patrick Patterson can do that, but when Ibaka is on the floor, defensively, they’re good. And offensively, he can shoot the mid-range jump shot. He’s done a great job of working on his game and extending his shot to the three-point line, where he shoots the ball well also. He gives them guys another outlet offensively.”

The Raptors elected to run a smaller lineup in their first-round series against the Milwaukee Bucks — a move that proved to be effective. Coach Lue says shifting Ibaka to the 5 (center) really helped them.

“When they (the Raptors) went small against Milwaukee, it was the right move,” Lue said. “They played small, they were fast, and I think moving Ibaka to the 5 helped them out in that series.”

One reporter quickly asked if the Cavaliers were healthy coming into their second-round matchup against the Raptors. Coach Lue nodded his head and replied with a definitive “Yep.”

Coach Lue said his team will be practicing every day this weekend. On Saturday, the Cavs will be working on defensive schemes. For Sunday’s practice, coach Lue wants to hold a film session and go over offensive game plans.

“The first couple of days is gonna be all defense,” Lue said about the weekend of preparation. “And then Sunday, we’ll do some offensive stuff. You know, show film of what worked, what was effective against this team — how we need to play.”

The defense of The Land resumes on Monday night. It sounds like coach Lue and his players will be ready for battle.

As always, thank you for reading and be sure to keep your browsers locked on Cavs Nation for more updates as they become available. 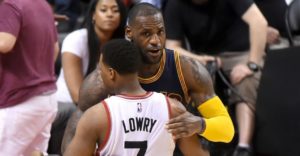