The Cleveland Cavaliers‘ offense has been prolific in the first two games of their second-round series against the Toronto Raptors. In Game 1 the Cavs scored 116 points, and then they followed that by scoring 125 points in Game 2.

One reason for the Cavs’ offense being so potent has to do with the play of Kyrie Irving. In Game 1, Irving set a playoff career-high with 10 assists. He topped that mark in Game 2, recording 11 assists. Rightly so, Irving’s play has Cavs coach Tyronn Lue singing his praises.

The Cavs will need Irving to continue “making the right play” against the Raptors as Cleveland has the opportunity to extend their series lead to three games with a win in Game 3 on Friday. 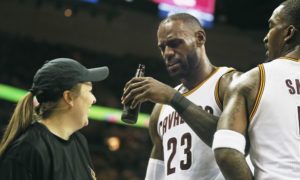 JUST IN: LeBron James and business partners upset with Great Lakes Brewing Company for use of likeness
Related TopicsCavaliersKyrie IrvingRaptors