Kyrie Irving is still trying to find his rhythm after the hamstring injury that kept him out for three games, and it was on display again last night as Irving registered only 11 points on 4-of-16 shooting with only one assist and a plus-minus rating of -16.

It looked as though Irving slipped straight back into form after his return, but despite his incredible fourth quarter against the Nets in which he scored 16 of his 32 points in the fourth quarter, as well as dropping 27 on the Suns two nights later which included four three-pointers, Irving did look out of sorts at times during both contests. Against the Nets, Irving shot just 10-of-26, and against the Suns, he turned the ball over seven times. It is uncharacteristic for Irving, who has been supremely efficient this season, but the Duke product has struggled in the Cavs‘ recent mini-slump.

In the last two road losses to the Jazz and Trail Blazers, Irving has shot a combined 9-of-34, and coach Tyronn Lue told Joe Vardon of Cleveland.com that he thinks Irving is out of rhythm at the moment.

“In Kyrie’s case he missed three games, almost a week, during the regular season that’s three or four games and you can lose a lot of timing,” Lue said. “Right now he’s just struggling to find his timing. A few times he had open shots he didn’t take, he passed up which he usually takes.”

Irving arrived early against the Blazers to put up extra shots and try and find his flow, and despite his tough night, the All-Star guard didn’t necessarily agree with what Lue said.

“What do you mean?” Irving said Wednesday night, after Lue’s assessment was relayed to him by reporters following the Cavs’ 102-86 loss to the Portland Trail Blazers. “I would say that if I didn’t come back and have 32 and 27 (points) and then we get two wins and then two losses and all of the sudden I’m not in rhythm.”

Irving was not disrespecting his coach, rather, he highlighted the need for a Cavs practice in order to get back to the basics and what they expect from each other.

“Tonight there were a few things that we tried to do out there on the floor,” Irving said. “It was kind of on the fly. We showed up to the arena, we’re showing on the pick-and-rolls and usually we have some visual guys, some auditory learners and different guys on the team.

“So practice does the mind good and the body good sometimes and I think we’re in need of it but we’re on a West Coast road trip, West Coast swing and we just got to make do with what we have.”

A Cavs practice will do them a world of good, and a player as talented as Irving doesn’t stay in a rut for long. Look for uncle drew to be back getting buckets in no time. 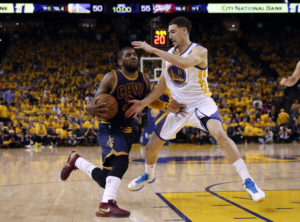