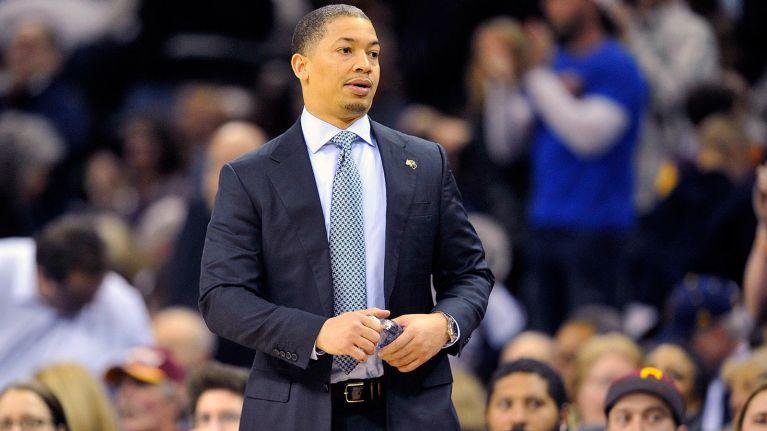 Charles Barkley was very unhappy with the effort of the Atlanta Hawks, who watched as the Cavs set an NBA regular season and postseason record with 25 three-pointers in a single game.

Barkley thought the Hawks should’ve tried to take someone (from the Cavs) out to send a message that they weren’t going to be messed around with. That wasn’t taken lightly from Shaquille O’Neal and Kenny Smith, Barkley’s co-hosts, as well as Charles Oakley, one of the most physical players who had his battles with Barkley in the early 90s.

Charles thinks Hawks need to take out someone on the Cavs (P1) #CavsNationpic.twitter.com/rYIK0FW1sV

Tyronn Lue spoke to reporters in a conference call about that comment, and didn’t like the idea of intentionally trying to injure someone as suggested by Barkley. Dave McMenamin of ESPN reported on Lue’s comments.

“I don’t think there’s any place in our game to take someone out if they’re playing well,” Lue said to reporters Thursday. “I think you can take it upon yourself to play harder and do things to stop it or stop a team from playing well.

“But when it gets into trying to hurt guys or trying to take guys out, that’s just not right. Hopefully the referees will keep an eye on it and make sure it’s a clean game. We don’t mind if it’s a physical game, but clean and everything that they do and we do is basketball related. I don’t believe in taking guys out and trying to hurt guys because a team or a player is playing well.”

Lue also felt like the Cavs deserved to try and go for the record, and that he didn’t feel they were disrespecting the the Hawks as Paul Millsap said after the game.

“That’s something that the players felt like it was within their grasp, they wanted to go for it,” Lue said. “I mean, records are made to be broken, I don’t see anything wrong with it. We didn’t do anything malicious. We were up 40 points and we got our starters out with four minutes to go in the third quarter.

“We got LeBron [James] out with 2 1/2 minutes to go in the third quarter. So I don’t think we did anything to rub it in their face or anything like that. We played the guys who don’t get a chance to play a lot and they felt good on the floor and they wanted to go for the record.”

The Hawks were clearly just frustrated with the loss, but they only have themselves to blame for being on the wrong end of an insane three-point record. Game 3 between the Cavs and Hawks is Friday at 7PM EST.