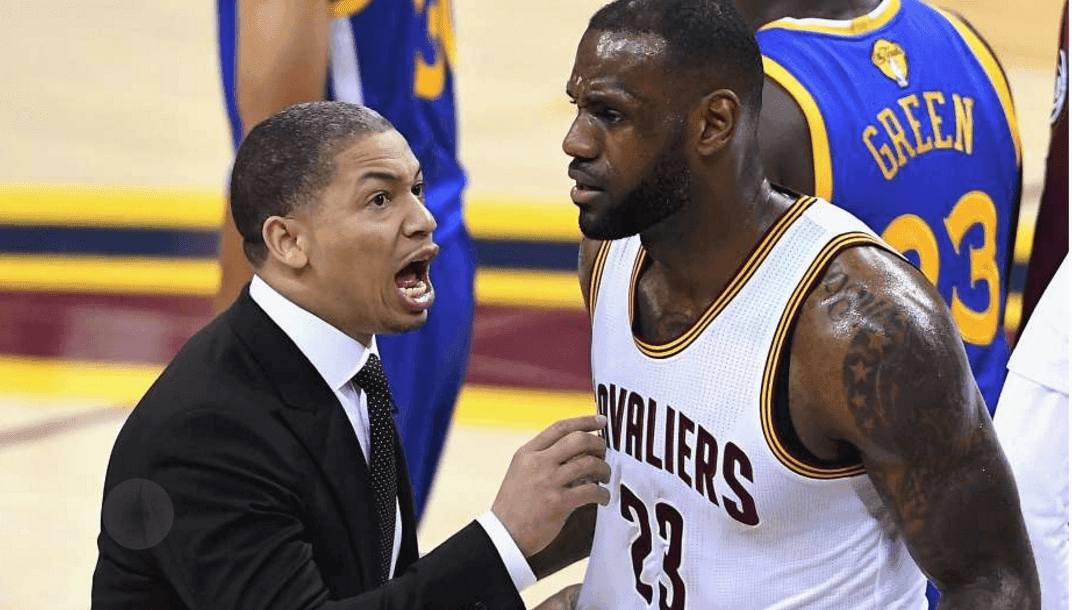 Last season, The Cleveland Cavaliers made one of the most memorable runs through the NBA Finals in history en route to an epic come-from-behind victory over the Golden State Warriors (down three games to one).

Most Cavs fans will never forget “The Block”, “The Shot”, and “The Stop” – moments that have been permanently etched in NBA stone.

Despite scoring a whopping 82 points, grabbing 24 rebounds, and dishing out 18 assists in Games 5 and 6, James and his Cavaliers found themselves trailing at halftime in Game 7. A frustrated Cavs Head Coach Tyronn Lue called a timeout late in the second quarter. James found himself getting an earful from Coach Lue on the sideline.

Lee Jenkins’ of Sports Illustrated recants the story in his recent Sportsperson of the Year profile on James:

With 2 minutes and 27 seconds left in the first half of Game 7 and the Cavaliers trailing the Warriors by three points, Tyronn Lue called timeout. “Bron, you’ve got to be better than this,” the Cavs coach implored.

“What do you mean?” James asked, incredulous. He had just scored 41 points with 16 rebounds in Game 5 and added another 41 with 11 assists in Game 6, evening a series that was essentially over. He’d sent his teammates impassioned late-night group texts, showed them the commencement address Steve Jobs delivered at Stanford and convinced them during a post-practice bus ride across the Bay Bridge that the championship was their destiny. It’s already written, he shouted from the back. “What more do you want me to do?” he pressed Lue.

“Stop being so passive!” the coach barked. “Stop turning the ball over! And guard Draymond!” James’s numbers looked fine–12 points, seven rebounds, five assists–but he had unleashed a few sloppy passes and Draymond Green, his primary assignment, was 5 for 5 from three-point range. “Bron was mad, pissed off at me, and then we went into the locker room at halftime and I told him the same thing in front of all the guys,” Lue recalls. “He was mad again, pissed off again.”

After Lue finished, he saw James approach assistant coach Damon Jones in the locker room and overheard their exchange. “It’s messed up that T Lue is questioning me right now,” James said. The Cavaliers trailed by seven. The season was slipping.

Everything I read all year is that you want to be coached, want to be held accountable, and trust T Lue,” Jones replied. “Why not trust him now?”

James was still rankled. He moved on to James Jones, his long-time teammate, who has ridden shotgun to the past six Finals. “I can’t believe this,” LeBron said. “Well,” Jones responded, “is he telling the truth?”

Lue, ducking in and out of a back office, kept an eye on LeBron. “He stormed out of the locker room,” Lue says. The coach laughs as he tells the story. “I didn’t really think he was playing that bad,” Lue admits. “But I used to work for Doc Rivers in Boston, and he told me, ‘I never want to go into a Game 7 when the best player is on the other team.’ We had the best player. We needed him to be his best. I know he might have been tired, but f— that. We had to ride him. And he had to take us home.”

James went on to score 15 points, four rebounds, and six assists in the second-half alone. James finished with 27 points, 11 rebounds, and 11 assists to go along with a pair of steals and three blocks. On the defensive end, a fired up James held Draymond Green to just 10 points through the final two quarters of play.

Coach Lue’s intentions were clear. It seems James respects Lue’s opinions and competitive drive – even if its something that gets under his skin. Lue did what he felt needed to be done in that critical moment, and the result was an NBA championship.