After a tumultuous period month of March, many Cavalier fanatics held their hopes on the ability of LeBron James to flip the switch come playoff time, influencing his teammates to also increase their level of performance when the bright lights are turned on.

The defending world champions did exhibit some signs of life to kickstart April, but their recent loss to the Atlanta Hawks set them back a few steps backward. Playing without four key players, two All-Stars at that, the visiting team jumped on the Cavs and took advantage of what seemed like a ‘trap game’ for the Eastern Conference’s top seed.

It was so bad that coach Tyronn Lue had no choice but to label the defeat in the worst but most apt way possible.

“Just stupid,” Lue told Cleveland.com’s Chris Fedor. “It’s tough because as a coach you’re searching and trying to get the right guys out there to bring some energy. Guys have been playing 38 and 39 minutes and Bron (LeBron James), you know, he seems to have the energy every single night. A lot of times guys are not picking that up. Tonight is where we needed guys to pick up the energy and pick up the slack. We just didn’t do it.”

It’s tough to find an excuse on this one. The Cavs had no business losing to the roster Atlanta presented to them in Cleveland. But they can use this as a motivation in order to overcome their biggest foes at this point — themselves.

For what it’s worth, the team can take comfort in the fact that this lesson arrived now and not in the playoffs, when it’s win or go home. 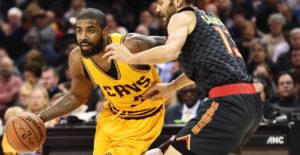 JUST IN: Kyrie Irving comments on his knee flare up against the Hawks
Related TopicsCavaliersTyronn Lue