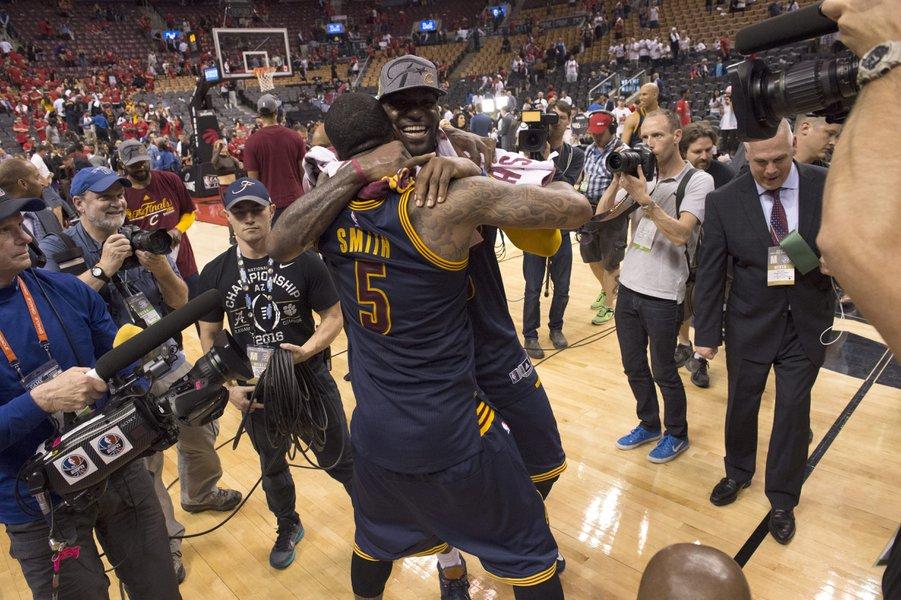 The Cleveland Cavaliers punched their ticket to the NBA Finals on Friday night with a Game 6 victory in Toronto. Here are some reactions to the Cavs second consecutuve NBA Finals bid that’s got a lot of fans pumped as well as many Raptors fans proud of their team.

LBJ heads to the finals for the sixth straight time! The King! WOOOOO!

Although Jamey Foxx was cracking jokes and impersonations after the game, Foxx said he was happy for LeBron and cheering for him.

Celebrity chef Michael Symon is a Cleveland native and loves his Cavs.

congrats @cavs !!…lets do this …great series & much respect to the @Raptors … #ALLinCLE

rare show of emotion from @KingJames … congrats king!…you got this!

J.R. Smith ended up showering with the trophy on his locker.

J.R. Smith left this above his locker while he showered. #Cavspic.twitter.com/OmQ1rjeOdI

What a run, @Raptors. You gave it everything and made us proud. #WeTheNorth

6 straight finals appearance for @KingJames who else doing that?! It's a reason why they call him the king! #AkronMade

Kyle Lowry after the game:

"Give them all the credit." Kyle Lowry on the Cavs' Eastern Conference Finals win. #NBAPlayoffshttps://t.co/zRAanpOxId

Huge congrats to the @cavs and the homie @KingJames! Time to bring it home!!!

You know WWE’s Dolph Ziggler was watching and enjoying Game 6.

All of Cleveland has put goose bumps down my back! You know I'm #ALLin216@cavshttps://t.co/HHYDr9it3G

I can understand not loving the guy but if you can't respect Lebron I can't do nothing for ya…. https://t.co/BECnYR2Lys