The Cleveland Cavaliers just did the unthinkable, overcoming a 3-1 series deficit to become the first team in NBA history to win the title despite being on the receiving end of that score. They also stopped a city’s 52-year championship drought and gave the franchise its first ever championship.

The odds could not have been any bigger than what they faced. Golden State was primed to complete their perfect season, but LeBron James channeled his dark side, the persona that the rest of the league prayed to remain asleep inside of him. But here they are at the top of the basketball world, and the rest have taken notice to their accomplishment for the ages.

Congratulations to @KingJames and the @cavs 2016 @NBA Champions

Chris Bosh appreciates his former teammate’s accomplishment and how big this means to the city of Cleveland. 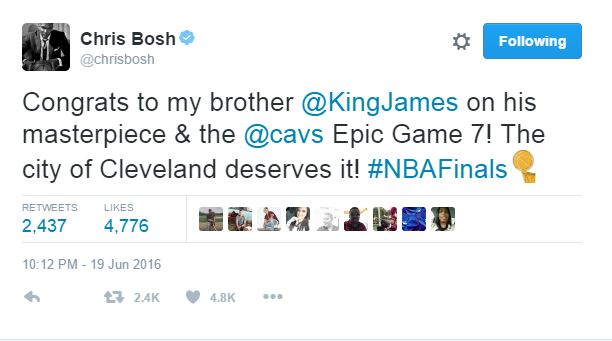 From one great to another, Magic Johnson chimes in on the LeBron James’ push.

LeBron James took this series over in the last 3 games, like the great ones do and brought the championship home to Ohio!

There’s an extra sweetness when it comes from a former rival.

This DUDE Lebron got 1 for Cleveland. Whoooooaaa. Will never type another thing bad bout Lebron!

Shawn Marion sends some love to his former running mates.

Congrats to the #CAVS and #CAVSNATION the was a great comeback, history was made tonight!!!!

Cleveland and NFL legend Jim Brown knows what it feels like to win one for #TheLand.

A wonderful demonstration of greatness! The @CityofCleveland, the @cavs organization, the team, the fans, and the great @KingJames..!

That block has to be a signature play of LeBron's career.. That was incredible

Congratulation to BRON BRON and the cleveland Cavaliers , the city has been waiting long long time #KingJames pic.twitter.com/uQDn6OWyZq

This beast might just be a future thorn on the Cavs’ side.

You recall the “Cavs for Mavs” days?

amazing. Congrats to the city of Cleveland and my friend @cavsdan !!!

A friend of LeBron James and a former Cavs shooter sends his props.

What an amazing series for @warriors & @cavs. Congrats to both teams & players on representing the game right. Congrats to #TheLand champs

Kenneth Faried with a shout out to his boys.

What an NBA FINALS! Congrats to both teams special congrats to @KyrieIrving & @TheRealJRSmith for repping NJ all day

A Canton native has an idea of how crazy it’s going to be when the parties start.

Cleveland about to be litttttt . Y'all be safe #330

One of the best winners in recent memory pays respect to today’s champions.

Amazing series for a fantastic season. Love this game!!
LBJ MVP without doubt, but Kyrie had some ridiculous moments.