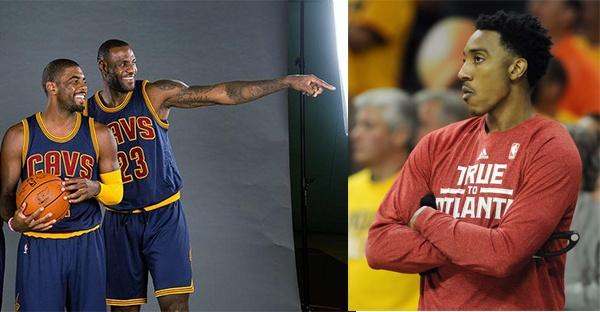 Today marks the start of the 2017 NBA Playoffs with the Cavs taking on the Pacers in Game 1 of the quarterfinal series. The key to winning any series is all about matchups and LeBron James and co. has already found a situation that is paying back great dividends. While Paul George is off to a fiery start on the offensive end, a forced switch on the defensive end between George and Jeff Teague is causing the much smaller Teague to be forced into a 1-on-1 matchup with James without any help from other teammates. Standing at 6′ 2″, Teague is half a foot shorter than LeBron who is backing him up to the rim or shooting 3s right over his head. The Pacers might want to consider sending help Teague’s way if they plan to compete with us on our home court. Twitter hilariously reacted to this completely unfair matchup:

PG carrying the team on offense and Teague on defense lmao

Why is Teague on lebron 🤔🤔🤔

Seriously tho! Jeff Teague on Lebron? He'll just shoot over him every time. No need to waste energy and drive.

Why tf do the pacers keep switching Jeff Teague onto LeBron

🗣WHY ARE WE SWITCHING JEFF TEAGUE ON LEBRON!?!??

Lebron got 5 back down dribbles on Teague LMAO

Watch: Kevin Love may have hurt J.R. Smith&#039;s feelings by not dapping him up

LOOK: Cavs fan has a curiously placed wet spot on his pants at Game 1 vs. Pacers

Is someone going to help Jeff Teague guard LeBron?? It's like LeBron is picking on him at this point. #CavsPacers#NBAPlayoffs

Yo get Jeff Teague off of Lebron

#Cavs just forcing Teague to switch every time and then going at him with LeBron or Love. Why did Indiana trade George Hill again?